Sligo's text message vibrated my phone on the metal counter downstairs in the kitchen of our cottage. I groggily got up and carefully made my way downstairs. It was a little past noon and time to get up. Saturday at GenCon was well underway, and it was time for me get revived and moving. Pery stayed in bed, and I can't remember if CCrabb was still asleep on the couch bed or not. Maybe I am thinking of Friday AM.
I found Monk and K-Bell sitting at the table where my Spacers "Attack of the Androids" scenario was supposed to take place. We faked a loud argument where we alternately threatened violence and calling GenCon staff to come to the amusement and annoyance of the tables around us. And when a couple players of his Wizards and Gunslingers "Blood Stone Quarry" showed up, we stopped abruptly. No one showed up for my game, so I chatted with the crew at the Events desk for a couple minutes before heading to the lounge in the Crowne Plaza. James, the bartender from the night before, and I talked for a bit, while I enjoyed my a cup of coffee and my first beer of the day. We both liked soccer, which meant that I could get a soccer channel on one of the TVs. Bruce Wayne showed up around 3pm, having won a free Stratego game from a 50th anniversary competition going this year. We caught up a bit and met a fellow from northwestern Michigan, and chatted away the afternoon. Wayne actually napped a little as his schedule is usually very booked. 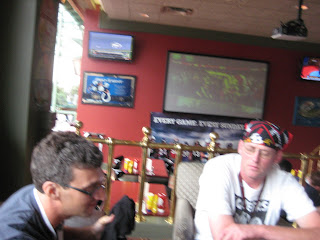 About 5:30pm Wayne and I wandered over to Cladagh, Klahh-Daghhh or however it is spelled, the Klingon joint where you get fish and chips. We got a large area on the patio and awaited folks to start showing up. And alas a lot of folks started popping up. Monk and K-Bell were the first I believe. Chris Rowan, and his friends Chris and Jeremie. Then Caed and two more. CCrabb found the spot. Rook and the Doctor were in the joint, but they stayed inside where it was cooler and they were chatting up a couple potential business partners. Peryton was the latest. And though Ronin, my name for Chris Rowan now, wanted to talk business, I pretty much wanted to party. After dinner, our group went from a gaggle to a lot of smaller groups. I was doing the "group leader" thing until I realized that I'd probably have more fun if I didn't. Pery, Monk and K-Bell went back to the B&B, while the rest of us promised to meet at the GenCon dance.
Bruce Wayne's g/f Amy, planted the idea in our head back in January about checking out the dance this year. Alas she was in Chicago, but since Ronin and crew were heading there, it seemed appropriate enough. CCrabb stuck around as her midnight game was still way off. And Caed of course made a dazzling appearance during a James Brown song. Wayne was in a dancing mood, so I kept getting him in trouble by getting towards the middle of the dance floor, where of course the pretty and physically fit folk like to dwell. So while reliving my high school dance days for a bit, I went back to the table where the adults were sitting.

At around midnight, Amy called and was back in town. Bruce Wayne bid CCrabb and me adieu. We ended up at Scotty's, her midnight game didn't happen. It was a funny time. I was wearing my Army ring on my left ring finger, instead of my wedding ring. It's a habit of mine since my right hand has gotten to fat for rings. But since it was hot and the day was all but over, I took off the ring as we sat down at the bar and placed it in my shirt pocket. The waitress and everybody else at the bar noticed this. Arched eyebrows ensued. And minds went straight to the gutter I am sure. The waitress we had had an agenda as she took out orders when the other woman slipped off to the bathroom.

"So have you two been married long?" She asked.
"Oh we're not married, " I answered blankly. " To each other."
"Ah you two do make a nice couple." She went on. "So what are you two drinking?"
"Make it two beers." I answered. "I think she wouldn't mind a Killians. We haven't known each other long."
"Anything else to make the evening special?" She asked.
"Some nachos." I answered. "And if you could call us a cab, to get back to the hotel?"

Back at the cottage, CCrabb and I made a point to wake Pery up with loud "shushes" and slurred whispering. Pery stayed up for a couple minutes while we recounted the events of the evening, and our steamy drink at Scottys, and then she stumbled back to bed. We were having too much fun, so we had a couple more beers before ending our reveling. We either talked about the fantasists of the early 20th Century or the Middle East, I get our late-night drunken discussions confused.

Sunday morning rolled around. Peryton and I both had games at 10am so got out the door quickly. We said "bon voyage" to CCrabb who would be driving out with fellow Green Mountaineer Nik Palmer, Dr. Nik. And we both showed up almost on time.

Pery ran another iteration of BEAN "Aqua Teen Hunger Force and the Book of Beards." Monk was mixing things up with B-13 "The School Days Of Napoleon Dynamite And Friends." And I was doing my victory lap with CoC "Rat-Pack versus Cthulhu IV: Lilith Be a Lady Tonight." Dan the usual Sinatra was a little later than me, so I didn't know which table I would be running at. But Russ, Lisa, Matt and Adam, mostly from New York City, if I remember correctly found me. And Dan did show up.

The thing about "Lilith" is that Frank Sinatra has been the heavy-weight for the past three years, with Dean Martin playing his Spock. So this year, the fourth of a supposed trilogy, I mixed things up. Lilith knew "Charm" better than the Chairman, and worked her feminine guile and seduced the hapless crooner within seconds of meeting her. And poor Dan, Frank's PC, couldn't make a resistance roll this morning to save his character's life, which was a lucky thing for me. The other Rat-Packers got to work and cleverly managed to foil Lilith and her minions, not once but twice to save our dude in distress. Sammy Davis Junior showed some amazing swordplay when defeating two of the Dark Templars. And even a nightgaunt couldn't distract the Pack from saving their friend. Juliett Prowse, this year's new 'Easy on the Eyes' member, did some rather jujitsu moves with her purse and high heels at that.

At the wrap, there was Monk, K-Bell, Sligo and I alone in the little conference room where we had been playing all weekend. I almost felt sad, but then remembered the victory dinner at Champions. Pery made her way there after finisher her before Christmas shoplifting of Dr. Who items. Trollgod and Corencio showed up as well. Paul Haynie, G'noll from Trollhalla, did a cameo with his lovely wife, seriously one beautiful woman. His performance at either end of the table was impeccable, but alas he would not stay to partake in the meal.

I spent some time back in the Exhibitor's Hall purchasing the books that I had promised to buy on Thursday. I ran into the guy behind Pagan Press, one of the joys, of so many, of my life. Pery also helped me find David Nett of my favorite Web series Gold: The Web Series. Nett, from here on out, thanked me for my pathetic sponsoring of his show, and I also a northern European to his northern European descent rebuffed him duly. Still I got an autographed copy of the DVD and kewl character cards. I also met the future superstar James Paul Xavier, who happens to be my favorite actor of the series.

Sligo then took us around town and showed us his favorite local game store, the whales of the Adventure Gaming world these days, the Arsenal. I liked it the moment I walked in the place, because I like the soccer team. Besides having a kitchen to keep the some revenue flowing in between sales of game products and gaming events, the place is just crawling with rooms for gaming-- both electronic and tabletop. This place is a treasure. Expect a future Hoot or Holler to be located here in the near future folks, first Frito-pie is on me.

We then were able to Sligo into hanging out with us at Bruce Wayne's new abode. Here we played Stratego, some new marble game called Stomp, and K-Bell and I played Rummy. Jordan likes to complain that we never hang out with him enough. Well, I'll have everyone know, he had to kick us out. I hope Sligo is still married the next time I see him. 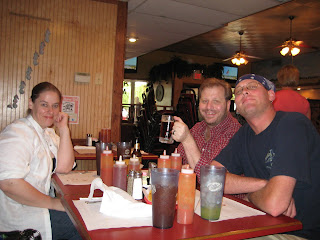 Monday, we drove Monk and K-Bell to airport and headed home. Poor Pery had to head to work the next morning, whereas I had the next two days off. Hence my long and winding blog recounting GenCon 2011. I almost want to be depressed, but now it's time to get ready for Carnage 14. 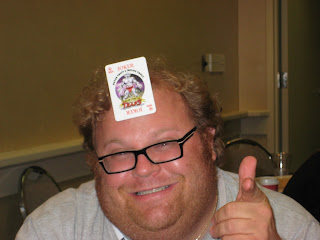