Sci-Fi Of Late: the Good, the Bad, And the Ugly

Last couple of weeks it's been some varied science fiction viewing for me. First off, Space Rangers has finally come out on DVD, which means I don't have to sweat about the aging VHS tape every time I get a hankering to watch an episode-- I do love the show. There's been the release of the Guardians Of the Galaxy last Friday or so. Robin found a post-apocalypse flik named the Colony for my work weekend Saturday night viewing sort of the opposite of "date night" but with KFC. I've also been able to watch Lockout a second time and pay attention to a bit more detail some time over the last couple of weeks as well.

Guardians Of the Galaxy was very good, and luckily for my tastes, more along the lines of a zany space swashbuckler adventure, like say the Ice Pirates,  than a superhero movie. While the comic book series must be big enough to merit a "Marvel Movie" (YEAH cliche plots already dreamed up and artistically directed by dudes studios don't have to hire), I've never been that impressed with the comic line's space opera compared to DC. This movie re-writes the characters of the series into somewhat more down-to-Earth (irony not intended) personalities than the ones in the books. Not a lot of time is spent going into detail of the Marvel space opera universe other than to establish that red and blue-skinned folk dwell there as well as well Earthlings, or earthling-like people. The spaceship battle scenes were not as blurry as fans of the Avengers and the later Star Wars flix seem to like, which I appreciated. The Nova Corp homeworld will remind the astute fan of 70s and 80s sci-fi of Flash Gordon's Mongo or Starcrash. Overall, a Bigfoot, on a scale of "Godzilla to Smurf," of a film, if only for the inclusion of Bowie's "Moonage Daydream" in the soundtrack.

Definitely a Smurf of a flik is The Colony. This is some sort of post-apocalyptic film where anti-Global Warming fanatics have frozen the world. I could tell that this was a Mad Max-meets-zombies flik about to happen in about ten minutes. Filmed mostly because Laurence Fishburne needed money and the Canadians use tax-payer money to keep their prettiest young kids employed, it goes no where slowly. The writing is confused about basic immunology, snowfall accumulation, as well as being clueless about human behavior. The visuals are as dull as doing a chore if not cliche. Things boil down to a fist fight, because North American films need fist fights to wake up all the folks who were snoring at the bad science (TLDR anybody on the writing staff?). It's one of those movies where characters only answer one out of five questions posed to them in the script so that the cameraman can focus on pained expressions instead, because articulation is bad or something. When one of the characters states, in a wise voice, "I've seen this before, but I didn't want to mention it" I wanted to go check my email. I really should've.

Re-watching Lockout was a bit more fun than I thought it would be. Very ugly indeed, as most movies involving prison riots tend to be, but not a bad Who-Dun-It overall in a shallow, sugary sweet sort of way. Set in a world that fans of Blade Runner or Johnny Mnemonic like, but really (really) gritty. The cast is either really talented or had a lot of fun during the shooting, maybe both. I am sure this flik was written by someone who role-played Shadowrun if not Cyperpunk back in the 80s. I am on the fence whether it's a Bigfoot or a Robo-Monster. I'll say Bigfoot because I enjoyed it. 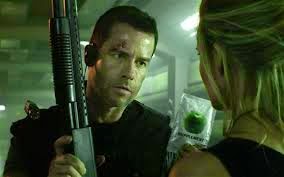