Only Spot of Disney Marvel TV Worth Mentioning

I wish froggies would stop spouting stuff like "heritage" about shows the Marvel Comics Universe when they obviously haven't read enough of the comic books to know who the characters are supposed to be. Instead focusing on who they think should be skinny, white, and/or male. 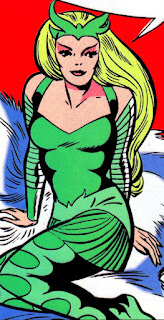 Case in point, Loki. Not great, but even I, who's read four to six Thor stories in 40 years, glancing at the "female" Loki recognized Marvel's Enchantress character. To be fair, the writers of show seemed not to know it as well as voiced by the TVA around the shows protagonists. I suppose that was Disney's sloppy way, already knowing the Swoon Juicers (SJWs) wouldn't be bothered to read any of the comic books either, of checking a gender-swap box without actually changing anything in the "canon."
About the show overall, a big meh. Not as much as a headache as say Wanda Meanders or Captain Falcon. The outside time kitsch was too Douglas Adams/SWAT fetish. Loki too Tom Hiddleston not a compelling anti-hero. The talkiness punctuated fist-fights was too format-machine driven.
SPOILER:
Had the TVA been so uptight about the timeline because of say a history of conquerors waging time/multiversal wars, the last two episodes might've come off as clever. Instead what we got was a poor tribute to the Wizard of OZ with a whole slew of cliche imagery not wrapped too well together.
The Enchantress of course was going to kill the man behind the curtain, the writing had led things to that inevitable point-- the Lokis would not take over control of an institution like the TVA unless the Disney's Marvel wanted to be known for being asinine. Finding out that the man behind everything was the most successful of the TVA's most notorious time bandito-lords, Kang, would have made the finale half way interesting.
Loki as a character was written a little too as a supporting role to whomever else was in the scene. Amping up the conflicts between the characters and showing the TVA struggle with him a bit more would have spiced all those talky scenes.
The series overall was cute. A Robo-Monster in the Godzilla to Smurf scheme of things.
Posted by Tom K. at 3:42 PM