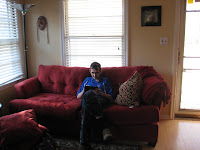 The west of the Miami River Holler, Illinois-ese, for Hoot, did materialize this last weekend, even if the folks from Illinois that the event was placed for couldn't make it. No "Awesome Overlord" admission badges for anyone; though, Scott, Sligo, and I were still the Awesome Uber Overlord's of the event so there was no going back. And this Birthday trip had a lot of serendipitous elements to it that made this Elvismas rather magical.

Jordan, hence forth known as Batman, instead of Bruce Wayne, reminded me the evening before the drive in Indianapolis that we would be staying at his house, not the Red Roof Inn. I was busy with homework, so I figured I'd just call everyone in the AM. We didn't leave the house until 1am. But the drive from Cleveland to Indiana that Friday morning was a little bit of fun. The roads were clear except for a couple truckers and us. Once we passed Columbus, I had a great view of the waxing moon and Orion in the western portion of the winter sky. Luckily Pery was napping, though she'll deny it, despite her snoring, because I'd shut off the headlights for up to 30 seconds to just soak in the view. We arrived in Indy and at Batman's house a little past 6am, I forced everyone into a root beer while I had a beer and we got caught up a bit before napping some.

After a bit of sleep, I was able to divert Trevor, Tre-Pod, to Batman's house instead of the motel. Alas JerryTel, ever the imposing sort, insisted on remaining at there. Sligo and I chatted via text messages for the early afternoon, while her majesty, Pery woke up and made herself presentable, Batman went for a run and Tre-Pod took a nap. The Arsenal's shifting opening time indicated that events would begin in the evening. During this time I noticed Batman's next door neighbors were Arsenal, the soccer team, fans. How awesome! 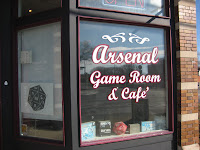 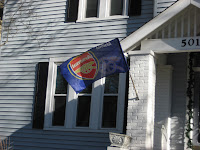 At the Arsenal, I can't say enough how impressed I am with the place. Between the well maintained appearance of the place, the functional kitchen, and the conference areas, this frugal, but not cheap-minded, enterprise shines among adventure gaming oases. Bill and his staff have high standards and it really shows. I hope to have many years of association with the joint. Counting up the attendees, the game festival idea just wasn't going to happen. So a Hoot, err Holler was. Upon revising the list of what was going to be ran, Sligo, Pery and Tre-Pod had play-testing events, so things were going to turn into GM workshop. JerryTel decided to stick to his "Game of Thrones" D20 scenario, leaving his first attempt at T&T for a later time. I challenged all the collected GMs to a die roll off for the first slot, which Tre-Pod took up. I won the roll and the first slot was mine. So I humbly pulled out my notes, inside a PDA, for "Journey Through A Strange Vale" and got started. 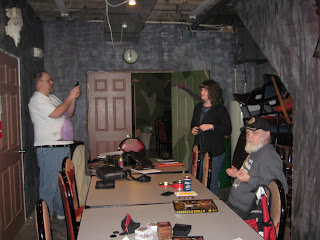 AND IT WENT AWESOME. Not saying there weren't glitches, like in the combat math (the second time in within three months, dammit), but overall it went well and I enjoyed myself immensely. Even when Batman had to get up and leave for a "few minutes," Jo-Jo, Sligo's friend wandered in a minute later and took over that PC until his friend showed up-- Just as Jo-Jo had to leave Batman showed back up, amazing. Kerry, called Wanderer from here on, a regular from Sligo's T&T group, proved my old adage "presence is like hair, better to have too much than too little. The actor can always get a haircut to fit the director's role in mind." He was good at providing leads for me to play off of, even if I had to tell him to let me run my NPCs and my own plot. The pacing of the scenario was pitch perfect though, and a couple spiffy tricks I came up with worked very well. When the group got to the "Strange Valley" my deadliness was effective but not unfair, and my major monster was fun to play and lead to some very good scenes. I played with the FBI Origin's 2011 card deck as a 'divine intervention' piece, basically any dead PC had to play Charon at a hand of Five Card Draw and win to somehow miraculously survive death. With that we concluded the first night of "InConTroll."

The following morning was a little hectic, but we found a rather fancy Mexican restaurant in an old Church that had some great grub and spent time with Batman and Colts Gal and her friends. Tre-Pod wasn't impressed, and I was stressed out because we ended up late for the noon game. By 1 pm though, we were developing characters for ND-RPG (No Dice RPG), Sligo's card deck based experiment. The scenario was just designed for mechanics-checking, though I am flattered that Sligo felt the need for a reason for our characters to be together, ie a role-playing premise. We the PCs were walking along a sidewalk, a hole appears and the scenario started from there. The rules worked well enough, and the opposition resolution isn't just playing gin rummy or poker, so there is something there. My own feedback was concerned with the character sheet, while others pointed to this or fact rules functionality or specific.

The Walk the Spiral (RobinHoo) scenario had everyone scared, seriously scared. Perhaps it was the start were everyone had was a pre-generated character, that knew everyone else in the party as a character in a FRPG campaign, but now were people from real life, who did not know each other. Maybe it was rather the surreal setting where time seemed to mixed up. A bit of over-reaction and being overly cautious kept things at a snail's pace for a while. I finally just got over it. Remembering that Pery wants to resolve this campaign and probably had not designed a Doom 1st-person shooter scenario so common among amnesia Lost-like plots, where the scriptwriter is pretty much making it up from session to session. Maybe following my lead, if misunderstanding the difference between a clue and threat, Tre-Pod, Sligo and Wandering began to act irrational, running from harmless encounters to calling out and waving to people with strange items attached to their belts or in their hands. JerryTel was looking furtively around still being very, very quiet. Because of the slow start, the ending was rather hurried. Oddly enough no character was killed. 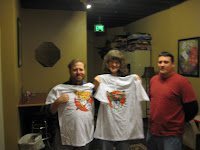 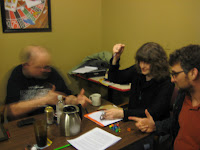 Tre-Pod's Saturday night game suffered the fate of all Hoot's "the last Saturday night game," everyone ran amok. At least no one fell asleep like last June. I became the "I Just Did 1 Million Hit Points" Guy. Though I derailed the plot, my experience points were awesome. Dude, I killed Quetzalcoatl. Almost everyone else followed suit and helped me cover my blood-stained hands from there. It didn't end pretty.

At the closure of the night's gaming, Colts Gal and a friend, Batman, Pery, and Tre-Pod treated me with a pubcrawl around the Fountain Square neighborhood. It was a great night. 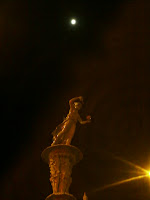 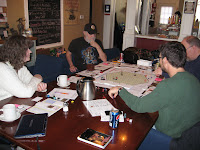 Sunday came too early for some, and too late for others. JerryTel cancelled his slotted Sunday game, having been left to his own means at the Red Roof Inn and could not take isolation from his fair and beloved pastures and rolling hills of Toledo. I personally think he was too overwhelmed by all the Awesome Uber Overlord GMs he saw over the past couple of days, myself, but that's just a theory. Tre-Pod we left in bed as the revelry from the night before was proving to be a little too much for him to find his glassed let alone consciousness. Sligo offered to step up with a T&T game, but decided to switch it out with his arena-style board game in development. Batman loved the game. Pery was impressed and I have to say that even the prototype looks great.

Wrapping up the playtest after two matches, at my insistence, we had a parting meal with Wanderer, Sligo and Batman once again on the Fountain Square. Batman took the longest way he could to get home, not wanting Pery and me to leave. Though it is flattering, I was in a state of near exhaustive panic at being so late. 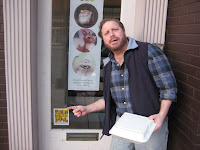 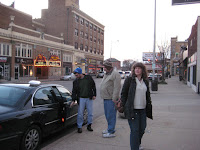 On the way home, I responded to a volley of Happy Birthday calls and a called a couple texters. Tre-Pod texted to let me know he was home and fully functional. So getting home at 11:30, Pery and I decompressed just a little before bed. I was an Awesome Uber Overlord this Elvismas, that takes some transition when slipping back into reality. 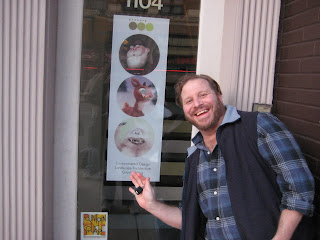 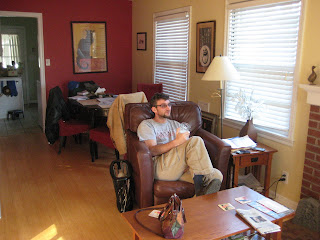