Smoldering Parts, No BBQ pt. 3: Bonfire of the Vanities

To use an often used quote after dinner, we proclaimed "let the games begin," and so they did.


I am the one with the big hair and having monkey sex on the scooter.

I jumped in on Dr. Nik's game with Peryton, Nissi and CCrabb. I should've known better, as this doctor is always a favorite of the ladies, his "Abyss of Insanity" had only female characters in a Foxy Five Fire-Team (re. Kill Bill's Deadly Vipers sort of way). Toe Head (Ray Hickey) had cancelled his Beer Bellies and Bathrobes, much more my style, LARP session, so I had to stick around. Despite everyone wanting me to play the 250 pound Helga, err Maria leader figurine, I went with the miniature that reminded me most of Uma Thurman. A nice mix of The Spy Spy Who Loved Me and Aliens Versus Predators. Nik's pacing and ability to shift gears when the genres shifted rather amazed me.

Afterward the traditional after-party began in earnest in the Kruppa's suite. I kept everyone that I could around about 5:30a. Dr. Watt and Jimmy stuck around as well.  After chasing down Dr. Watt down the hall for a hug that never happened, I stumbled into our own suite and regaled Peryton with tales of my exploits, since she had missed them all by going to sleep three many hours earlier. I was surprised when she didn't take notes.

The next day, WE FOUND THE GROCERY STORE thanks to Dr Watt's directions from Jimmy's "finder thingy." I spent the trip getting to know the kids, Nissi and Toe Head, and keeping an eye on CCrabb, who just drank way too much the night before, so she needed my protective moral oversight. Actually I just had my keys in my hands when someone asked about who was driving.

Peryton's "Any Port In a Storm" starting that afternoon did nothing but reaffirm that she has only married me for my Pyramid-Heads and Sewer Monkeys, now named Spider Apes. For a CoC adventure it was quite Dr. Who-ish, and her already swollen head just bigger when everybody (Dr Nik, Dr Watt, and Hrothgar) loved it.

Okay I am lying. There was barbeque over the weekend. Dr Watt took a handful of us to Dinosaur BBQ. Pery and I had been there once before, oddly enough on the home from Carnage the first time. And to quote, maybe paraphrase because I'm never paying that much attention, Tyler, "The only good reason to be in this dismal town." I am sure he meant the "second" but why quibble? I had something called a Pork Porto, which rocked. I think Dr Watt had something called "the heart attack special with mac and cheese" or some-such. Really there was like three kinds of beef and plenty more. 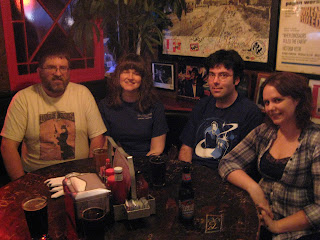 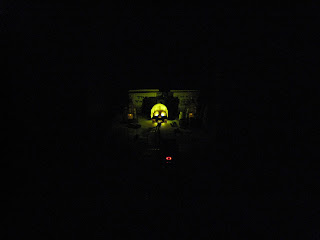 "The Vault" was the Kruppa's evening presentation, and I prepared myself for the Homeric voyage into the underworld that had become his suite. Jimmy, Daniel Williams, impressed me greatly. Not just for his expansive knowledge of lineages of most nobility and Catholic personages, as well obscure folkloric persona in English history. The man had me sympathizing with his double-murder/suicide of his wife and then his sister. Maybe it was more about someone else wanting to to shoot Peryton, who played his sister, besides me. That said, this scenario if anyone wants to do a Kruppa scenario, I cannot recommend this one enough. There is some great Andre Kruppa acting, complete with lighting and sound, to just sit back and watch. And I got away with the gold.

This after party ended early, at 3:30am or so. I suddenly started thinking in German and knew it was time to get some sleep.
Posted by Tom K. at 5:23 PM

The next day, WE FOUND THE GROCERY STORE thanks to Dr Watt's directions.
Dan's thing-finder did the heavy lifting. I happened to remember long enough to relay the information.

Ooh! I need to buy a thing-finder for the children!

They are far too young top be finding "things"

Not THAT kind of things! :P