Just before dinner, or "cake and coffee" as I was calling it, on Saturday, Ken,  then G'noll, then JerryTel found Peryton and me sitting down in a rest area just off the massive ramps that make up the central area of the Student Union building. We lounged about for a bit. Ken taught us to play "Cthulhu Dice." When Jerry  showed up we talked a bit about zombie awareness levels for his T&T: Stay Alive. And then right at 5pm, I announced that I was buying drinks, my way of ringing the dinner bell. During dinner, Ken and G'noll were going in and out at separate times. Ken had started to get worried about his return flight out of Detroit on Sunday. We started talking about the weirder facts of 1945 through the mid 50s. This prompted a fellow sitting at the table to mention that he liked that period of history as well, so of course we invited him over. And we got to know Max, currently a philosophy student and a fan of Kurt Vonnegut. Really up on his Russian and Baltic history. He and I went pretty loopy.

At 6pm, Ken had a "How to T&T" panel, which JerryTel and I had been edited out of the description in the event program. Once again I didn't mind. But I came in to watch the festivities just in case I was needed. The Trollgod had things very well in hand, so while sitting in the back, I started thinking about the upcoming T&T supposedly mega-event "Ragnarok." You see, while I have a pretty good outline of the structure of "how to run" for about 12-20 ppl, and a pretty good knowledge of the Eddas, I hadn't really been working on it since I wasn't sure if Ken was going to be at BASHCon or not until a week before. My co-GM and scripter, that's Jerry, was getting sick with nervousness. G'noll, jumped in to play the third GM or the Death God. Providence snuck a peek into the room...

A fellow, an avid Pathfinder player, named Chris, that I had gotten to know the day before popped his head through the door for a second. I went out of the room and started kidding about d20-heads spying on six-sider meetings. He and his friend asked if I had heard anything about this Ragnarok thingy coming up. They heard that Ken was going to run it. I mentioned that I was helping out there.  I then described to them the theatrical structure, and mentioned Nordic villains like dark elves, fire giants, and gnomes that could turn into mist. Listening to myself, I not only sold them on it, I sold myself. Going back to the room, I alternately pulled G'noll and Jerry aside and threw out details that they'd could use. I slipped out and went to the room where the game was to take place.

Sigfried was already there, testing a solo scenario out of his new Level 7: Escape game.  And he was ready for the Ragnarok session as well, not knowing that I it was even a T&T thing or that I was involved. G'noll came in and set up his area as well, and started making notes. I was about finished with about 3/4 a page of notes myself when people started arriving. Becket from four years ago showed up. And a whole slough of other folk as well. A fellow, named Alex, who proved to be quite up on Norse mythology, mentioned that the description in the program, once again where I wasn't mentioned, had a lot of "key words" that told him it was going to be good. By 8:02pm I was up to my neck in having folk develop player-characters. Luckily we short of the 12-20 mark. Gnoll started helping out. Sigfried jumped in as a "Coach." I ended up having to send a messenger to JerryTel to get his butt over to the event, meaning that Ken's "How to T&T" was going awesome. About 9pm, JerryTel had a group of players off in Elfheim. I had a gaggle in the Middle Realms. And G'noll was quietly waiting for bodies to start coming in. I had a player assigned to be the World-Hopper, the reincarnation of Baldur with amnesia. I started the stop watch. 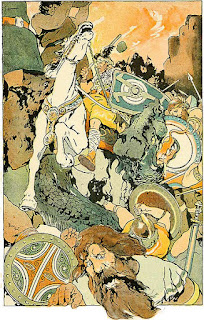 Sigfried was playing an elf Wizard, who had some awesome stats because of awesome rolls. He had a couple kindreds (species) of troll, a minotaur, and a dark elf in his group, so I went with Brother-Versus Brother for the Crown trope. After a bloody reception upon his homecoming, Sigfried's Character and his brother were told to knock it off with the feud by the island's elders. Instead the Characters were told about a giant monstrous goat that had fallen from the sky and was ravaging the elves' holy forests in the high mountain valley. Using some "lore" the party believed it was Tanngrisnir, one of Thor's goats, because it liked to bare its teeth by all accounts. What they didn't know was that it was GOATERDAMMUNG, and that it was accompanied by a horde of broos... err goat-heads (Sigfried is a fan of old school  Runequest). G'noll got some business in short order.

At 10:10pm, no matter where anybody was in the room, I sang, poorly, the Act's closing scene, Fenris devouring the sun and gulping down the moon.

Act Two began, with a back from death Sigfried rather smartly deciding that with the sky falling, the monster quest was over and that they should head back to his hometown. Of course that didn't stop the Shadow Kin from giving Gnoll some company. A Nissie in a stream tried to help out as well, but the remaining Characters got lucky. Back at home the elf was able to prove his brother's complicity in the eve of destruction, and was granted his place on his throne of his homeland. And with that, he went forth with the remaining armies of light to face the oncoming of invaders. What he didn't figure on was that Goaterdammung and his goat-heads would be waiting for them as well.

Because of a miscommunication between G'noll and myself, Hel was not opening the doors of the underworld any longer. So none of the Middle Worlders were coming back to my table. Sigfried and a wolf-troll, both champions of light mind you, and an army of elves were getting pretty tore up. But with luck, I drew the right card, I was able to pull the World-Hopper into the fray. And Becket, playing Baldur's reincarnation, was actually a champion of darkness, so he basically stabbed Sigfried in the back-- hence my nickname for Alex from MI. And so the wolf-troll, played by a fellow named Rob, had to rally the forces of goodness and milk, after killing the reborn Baldur of course, to fight on. The High Worlders, off in Elfheim, were a little bogged down themselves, so couldn't come help.

At 11:11pm, I sang the second Act's closing scene. The mutual killing of Loki and Heimdal as the rainbow bridge, Bifrost, collapsed. The two gods' blood rained down over what was left of creation, hitting players here and there for both good and bad consequences.

I then brought the worlds together, even those in Hel's realm, as the wolf-headed Garm is unable to stop them in the end of times. And since it was late, I had the ghost of Sigfried battle the ghost of his brother Lohr, using only their Luck attributes. Light prevailed, and the world was reborn. Becket became the moon, and Sigfried the sun. While the valkyries cleaned up the place, while Lif and Lyfvrasis, come out of the woods where the last two beings alive had been hiding.

Peryton and Ken strolled around the corner as everybody was clearing out. It was a good run for sure. We had a nice group of folk walking back to ours, and a lot of laughing. Ken, Peryton and I stopped at Del Taco, Pery and my Saturday night in Toledo tradition, for some take out back in the motel rooms before bed.
Posted by Tom K. at 6:26 PM