As a kid of the seventies, I caught many of the best parts of over-population and ecological disaster and their warped futures science fiction ever. Whether we're talking the rather gritty and practical Soylet Green, to the rather stylish and fantastic Logan's Run. I actually read the novels years before I ever saw their movie presentation. Oddly enough, I saw Walking Tall, the Exorcist, The Texas Chainsaw Massacre and Jaws before I was 18, err or 17, or whatever age it takes before kids can get into 'R'-rated movies, but rugged Charlseton Heston and glam Farah Fawcett were too much for my family. So as it was that I'd be in my 30 before I saw Michael York as a sandman, it'd be in my late 40s, damn-near 50, that I'd find out about the novels by Thomas J Bassler MD or TJ Bass. I thank Ben Assaf for the lead from over at Good Reads. 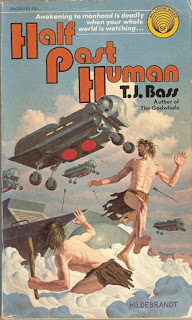 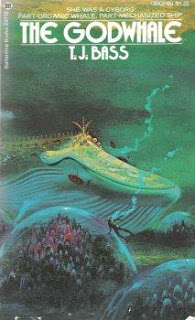 The population boom is not so much a failure as it is an absolute success. Thousands of years in the future, humans as we know them are being replaced by the nebish.  Millions of billions, possibly a trillion or two, inhabit the planet. Every square inch of the surface that isn't a mountain or tar pit is relegated to being dedicated to agriculture. The humanoids, and their entourage of vermin and parasites, are pretty much the only complex organism alive living in vast underground cities. The population centers of the world comprise the Hive.

Much as we view bears, mountain lions, and neanderthals the nebish view their contemporary human neighbors. Unlike the bears and lions, the humans tend to really be dangerous. The battling between the two makes quite a fulfilling sport for combatants on both sides. The most successful nebish hunters even tend to defect to the outside world and become "cow-eyes" (one needs big eyes to be above ground) themselves.

The dystopic future presented by TJ Bass is undated, and keenly not easily outdated as a lot of science fiction ends to be. The author was a physician and his understanding of biological science shows, but he keeps it fairly understandable to non-scientist reader, like me. His technical world is functional without belaboring too many engineering processes and he avoids over specifying the technology itself-- unlike the petroleum, fusion, and telephone-driven futures of 1945-1995. His societal evil is quietly competent and many a corporate employee reading this will get it right away. She maybe even agree with the Hive.

It was Bassler's take on artificial intelligence that I liked the best. While the humans, yes even the nebish are human, have complete story-arcs, the reader gets to know the AI working around the characters. I find this last bit the most interesting aspect about these two books. In a time where sci-fi writing is dominated by evil electronic-minds overtaking humanity, it is nice to see how a non-robotic engineer can understand how AI will most likely become helpful and therefore actually used by humanity. The works taken together rather reminded me of how HG Well's works, especially The War of the Worlds or The Time Machine, not only read well but are still relevant as speculative fiction. Definitely a couple of King Kongs here of S-F literature.
Posted by Tom K. at 9:49 AM