Friday morning came about with me realizing that four-star luxury meant that microwaving food and ironing clothes were petty prolétaire annoyances; that so would've made my life easier, but real GenCon exhibitors wouldn't complain. I suppose to-go boxes are for the masses. I should be wanting to go downstairs and spending $17 on whatever that included eggs and whatnot. Or I should be holed up in my room and eating pop tarts and making turkey sandwiches with ketchup, no mayo, for lunch and dinner. Peryton stumbled her way out of bed at ten minutes before the booth was supposed to be open so I walked over there. I left her my $19 pancake leftovers from the restaurant along with a plum. I shoplifted the plum, to explain to all how I go about things. 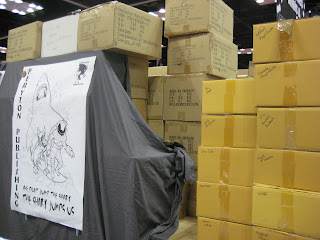 Friday our sales increased by 1% worldwide when someone bought a dozen PeryPub products within moments of us opening at GenCon. Sadly that was on-line. Throughout the day, sales improved in person as well, mostly folks from my "Balrog in the Basement" session the night before. Sligo and John Bennet, Cram, showed up and made on-going great conversation. I met an artist by the name of Derrenn Canton who was interested in doing art for PeryPub, I set up a lunch date. One of the T&T fans that were buying items from the game the night before was a Michael. The man was really adamant that I meet some "Jimmy Sutter" over at the Red Brick/FASA booth some 900 miles to the east of our booth at GenCon. I nodded and smiled, but you know I was thinking more about a nap than anything else.

Not that I ignored Michael Hammon, he is a T&T man from Columbus with ties in Toledo, stay tuned kids.

I left the booth to Peryton's more-educated approach to salesmanship, to head over to hotel for a nap. An interesting interlude happened. Because of some interesting construction going on I decided to take the "sky way" back to the Omni. I missed an elevator, so I decided to take the stairs, but as the elevator door was closing a young woman wearing triangular glasses, and a rather short beige skirt looked intensely at my gut. My "Exhibitor Badge" happened to be in front of my pent up manliness gut. While walking over to hotel just across the upper level, the same woman was a few steps in front of me. As it would happen, just before she turned off the thoroughfare she dropped stuff, well plenty of scrap paper. Where I am a sucker I helped her pick things up. Where I am not a sucker is that I read her business card, laying on the floor in front of me, and figured there was more to come.

Back at the bar with Jack, I ran into a guy that I ran a game for last year. Craig, removing a letter and replacing it, was rather enthusiastic about seeing me again. The drinks were on him. So while Jack and I worked out the details of the Korean war, Craig worked out the details of a decent scotch and soda. And after a couple of the drinks, when I excused myself, the fellow followed me to the far off JW Marriot or whatever. He insisted that he buy me dinner, a steak no less. The meat was marginal, but the broccoli and fries were awesome soaked in its gravy.

So I showed up for my "The Tunnel of Hard-knocks" a bit over-fed and well imbibed. Well I had to ask exactly where my game was, which was my introduction to an ongoing ittsy-bittsy drama going on for the GenCon staff. Someone was not wrapping up their game very quickly. Now had I not been late and a bit loopy, the situation would have been handled a bit differently. But in this instance, an event coordinator  got to prove their worth and act all dramatic as she recited some passage from an obscure GenCon policy, which she had looked up ten minutes earlier. This one outdid most in fax outrage while speaking to the offending GM.

This GM, after being chided by the event coordinator heard my name and suddenly stopped listening to her and looked at me. Apparently he was a big fan of me as well. James Sutton introduced himself while I apologized for all the officiousness going on. I did mention, that he should acknowledge the players lining up around the table when his game runs over to avoid the awkwardness that him and I were in. All the same, we set up a meeting for Saturday to talk about things T&T.

Don't read too deeply into my insinuations here. The woman dropping her business card so that I could pick it up had nothing to do with Craig, my fan player. Craig had nothing to do with the hall monitor. And the GM in front of me was more worried about the success of his game than he was about reading the schedule and knowing who was coming up after him. It was just rather fun and dramatic afternoon.

The Hard-Knock Tunnel worked out nicely. I ran a tunnelhack adventure that ended up in a battle. All within four hours. A handful of old-school T&T players, the most demanding audience sword and sorcery fans that I can think of,  decided that my GM choices in rule tweeks and how they worked were not only effective, they liked them. If I die anytime in the next three weeks, assume I died happy.

The evening's CoC game "The Tarot Deck" went swimmingly. The players caught the clues and only one of them died. They didn't piece enough of the mystery together to avoid the two villains from escaping. The players were so into their roles, that I might just run a semi-private game for a couple of them returning as the PCs from last weekend.

I was supposed to meet Caed for her birthday party, but she was having a problem with her foot. I also hear that her Zombie Walk only had a few participants, so I bet she was boozing and barbituate-ing in her sorrow. I found her text message not to swing by as I walked into her hotel's lobby at 3am. That's okay I needed the exercise as I backtracked back to our hotel. 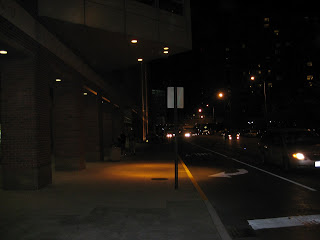