The Stuff of Sandpaper, but of the Beach as Well
From the 11th until the evening of 14th, I was sitting around at home putzing around here and with my Spacers(TM) scenario "53 Miles West of Venus." Most of my After-11CoC adventures were flow-charted out at, while the T&T ones were pretty much complete. Now all I had to do was wait for GenCon to actually start. Peryton was actually lucky, she still worked up to the last evening where we had to pack up and head to Indianapolis.


Wednesday morning was spent stamping my foot to remind Peryton that we had work to get done. And then most of the day was spent with me waiting by the car while she disappeared to meet contacts inland in the jungle war-zone of the Exhibition Halls. And like advance troops anywhere, Pery spent her time hanging out and thinking of calamities to avoid getting work done and to get the folks back at home riled up. I actually shared a cigarette with Sheriff's Deputy who came by looking at his wristwatch, our car, and the time limit sign. We became fast friends. Upon hearing that a dolly for getting multiple boxes from the car to our booth area would, would take "a few minutes" because of contract obligations with a nation-wide temp-help agency by some game manufacture association, I told the woman to come back to car. I made her give me my exhibitor badge, and drove us to Acapulco Joe's.

With a frosty beer mug and tall, wet glass of ice tea in front of us, I found a flyer for UPS in the extra paperwork that came along with the badges. With a phone call, we had a dolly that we could pick up in about an hour, or earlier. So after a late lunch, I left Pery with a full dolly of boxes to make her way back to the booth area and set up. I drove the car out to Jordan's, Batman's, house, and made my way back via bus-- which happened to be the most air conditioned and least time consuming part of my day.

Back in the convention center, Pery had finished up the booth. The AC wasn't on, so Jim Searcy was worried about me having a heart attack as I touched up this or that around our setup. It was with some relief that I stepped out of the convention center to walk the dolly back to the UPS store. On the way to the hotel, I saw another red-head who had just walked out of a building into the August sun. We made eye-contact.

At the hotel, I stopped off for a refreshment at the nice bar at the Omni Severin hotel where we stayed this year. Met a fellow Finn turned into a World Citizen by the name of Teemo Toivanen, Timo from now on. His and the bartender's, Jack,  conversation, was such comforting replenishment, as well as the Sun King Pale Ale, kept me there for a while.  Well a "while" means long enough for Peryton to call me and ask if I was ever going to bother finding our hotel room. I told her to meet me at the bar. And started to assemble the gang for this year's Old Home Night. We invited Timo. I think he enjoyed himself. 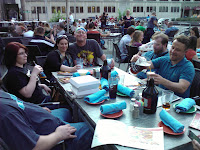 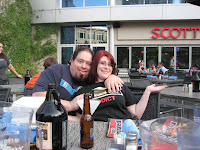 Just a quick note to Scotty's Brewery, there is a reason why dance floors, not diner tables should go next to live music. And whoever was the band's manager is going to have his ass whooped by me personally next time I see him. "Take the chairs. I need the table." Why can't he sit next their speakers? He's lucky he got the hint that no one wanted to hear his talented trio and wrapped it up in an hour.  And Scotty's, you're getting as bad as the Ram in bad crowd management.

last part of the evening was spent with having the half-drunk gang get their badges and a nightcap. The Will-Call was open all night, good job GenCon. The Southern Gentleman's fiance Frostie, no nickname required, was a hit with the whole gang.

Shark Week?
Thursday morning came for me at like 4:30, so it was no problem for me to show up at the booth before the 9am early opening for the GenCon Very Important Gamers, the "V-I-G"s, or better yet "the Viggans." Pery was still blow-drying her toenails or something. This event pretty was much a gaggle of gamer-folk trotting towards the dealers with the biggest signs while knocking each other out of the way though there wasn't anybody around to be in a rush for. One of the Viggans, a short chubby guy with dyed-blonde hair, a Ken St Andre hat, and knock-off tan duster kept walking past the booth and trying to make eye contact with me. I was in a conversation with a 13 year-old about sharks, our poster had the quote "PeryPub We Don't Jump the Shark, The Shark Jumps Us" when the guy coughed trying to interrupt. JFK, Myth, a PeryPub contributor as well the guy working the booth next to ours tilted his head when I waved the guy on.
Yes Shippy, I received your email. Hoo boy, you came to GenCon and spent a lot of money before you got there. Until you stop messing messing with TrollHammer and Sligo, we're not talking.

By 10:15am, I was wondering what was up with all the response to our booth's poster. It had a shark jumping a spaceman and a goblin on a surfboard. Finally Peryton and fortieth person to comment on it explained to me that we were in the middle of Shark Week on the reality show network posing as something educational on cable TV or some such. I couldn't help but ask, "Where'd they work in the midgets?"
Posted by Tom K. at 10:34 PM

So... getting badges, finding the booth site, checking in with our distributor, and trying to scavenge some sort of box-carrying device constitutes "hanging out and thinking of calamities to avoid getting work done" while sitting in a car and smoking is the stuff of manly assertiveness. No wonder you and that cop got along so well. :-P

"...sitting in a car and smoking is the stuff of manly assertiveness."

I don't the negatives here.