A Trip Through Cornfields 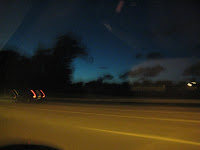 Last Tuesday night, about ninety minutes after I punched out at my day job, Peryton and I had the car packed and ready to go. So with an early night-feeding of the cats we were off. Having gone down to Indianapolis a couple weeks earlier we drove through Toledo and then towards Defiance and Forth Wayne to get there. Either the route is just new to us, or the loop around Columbus and then the crawl through the Dayton area just suck, but even 35 miles longer, the trip went by quickly and we weren't in rigor mortis by the time we arrived at Jordan's, Bruce Wayne's, house at 3:15 am or so. The door was open so we found our nooks after a a quick "Hello. Grab a beer!" scene with our host. He acted like he went to sleep, but I bet the Penguin was up to no good.

I think Robin was rearranging her purse until 7:30am or so.

And Let's Begin the Began

The Booth: Grabbing the badges, setting up the booth, checking in to the hotel, with a lunch break went rather efficiently. Last minute items like getting our posters hung and a couple cozy chairs I'd have to be a bit more patient with. The posters got taken care of about an hour after we opened and the chairs arrived sometime in Thursday afternoon. But overall we had more than enough help and friends willing to come by keep us company. I think on Friday I felt a little overworked but luckily James and Dawn Sutton were right next door. Eloy Lesanta, of Third Eye Games, and Jeff Combos, of Exile Games, both two game designers that I want to be when I grow up, would plop down in a chair and we'd chat a little shop as well as just talk. But overall, there was always some PeryPubber, or "Blood Relative" to coin a term I coined dragging James Sutton off for a drink, ready to jump aboard and help out at anytime.

As for sales and the general impression we were trying to make. Our spot had a general public book shelf right behind us, so we turned our book shelf inward to share a shopping aisle with the ever full Studio 2 shop. Our area was saved for a sit down area where spontaneous parties, as well as study halls, would break out. I joked with many people that "Last year we worked too hard sitting behind a table like we were recruiting Scientologists. This year we're raising the bar in laziness." I threatened that we'd shoo away anybody looking at our books. 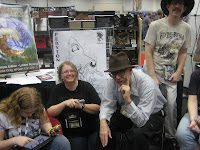 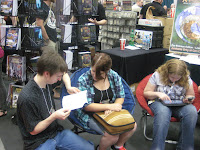 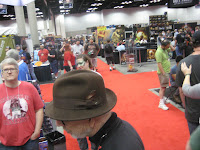 That said what was really going on was that I've noticed that sales in the context of role-playing games is 89% name recognition, 10% art and/or shocking title, and 1% salesmanship.  We'd get busy on the game tables, usually after 1pm for me. No need to be uncomfortable when waiting for nibbles on top of being under-slept and usually hungover. And my own face-to-face sales percentage increased by 250-7,ooo% over last year. ...Peryton probably is thinking 'I told you so' as she reads this. 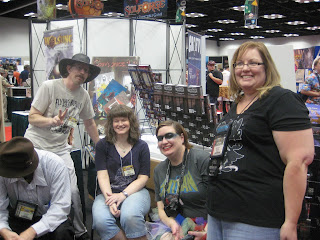