The Hotel:  I keep having very favorable impressions of this place though there is some cognitive dissidence going on. Well, the place is trying to sell itself as the 1920s beset by the 21st Century that has happened to fall around its ears. For the most part I get it.
My room was nice single with a large-assed bed with a little room to move around because they were able to remove the TV cabinet for a flat screen. But if you opened the front door, people could stare at your wife stepping out of the shower... without her and you being paid first. And resort-style services, like towel replacement or someone nice at the front desk, was dependent upon the people on the clock whenever you thought to bother them.
The pub and grub joint was stepping up, even if they weren't quite certain who was supposed to be reading the menu that the hotel management was making them hand out. I speak to a certain chef, or cook, or whatever dude standing in front of an open flame with a spoon, who made a wait person walk back twice to show that the menu promised "Biscuits and Gravy All Day" on Sunday morning. Don't get me wrong here, the Canterbury's restaurant bar is wildly world class in essence. Luckily the staff doesn't know it, because it was one nice place to hang out for the likes of me. Even if I was the one guy who didn't order scrambled eggs for breakfast.

At the same, I'd be awoken at 5:15am by sulfur fumes from a dump truck outside after falling asleep at 4:10am. The maids liked to hide clocks after setting their alarms, while not picking up towels. And then there was a telephone in my bathroom. Hard core space utilization. Hard to say if I like the place or not. Apparently the hotel is still trying to figure things out.

The Bonfire: As parties go. I really have nothing to complain about. And in case that you haven't noticed, I'm into parties. Whether or not you're into them, I am not all that concerned. And if you haven't noticed yet, we need to make this clear (Sligo).

Old Home Eve (the night before the convention), was a success. Peryton wanted Cladagh as our spot, I ensured it. Bruce Wayne made sure that we got there. Eloy Lasanta, John Kenedy, Jerry Telehe, Robin Fenner (Caed) and about 18 other folk showed up to show how much fun can be had on the night before GenCon. This year, other folks friends added on about 6 others, I think the pictures are available elsewhere... . John the waiter mentioned that the table was reserved for 14, not 22 at the end of the night. I think I made things right. 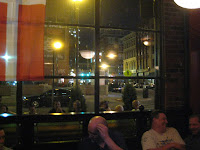 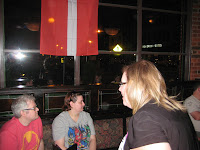 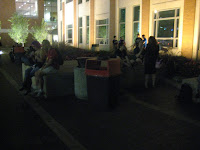 The after party of Old Home Eve is worthy of mention. I was hanging with JerryTel, Caed, and Sligo (F. Scott Grant) after the big party and reconnecting with reconnecting with them. Luckily, when Sligo wasn't worried about about being burnt at the stake for being a Christian, he was trying to sell Amway through a game that he was designing, and then after that he was more than willing to hang out with debauchees. I frankly was being provocative. The other two friends waded through things with notable patience. But it was still a good after party.

By not running a "Cthulhu versus the Ratpack" scenario, a group of folk decided to not talk to me. I suspect this handful of folk were responsible for my no-shows on Friday for a game that was sold-out.  During the day before at the booth, I noticed each of you that scrambled by making sure to give me ominous stares. Well, I am working on something else these days. I've had you go up against Yog Sothoth, Dagon, and Glaaki. You've resurrected important personages and had a remake of The Highlander. What have you got in your pocket? I'll play in it, just let me know.

Two, no three times I held JerryTel up while I found things to party with him about. Running next to him was awesome for that. We definitely have to make this a tradition. I had the most fun when it was him, David, Cram and me discussing intricate T&T details after my Saturday night game.

That same evening, I got to know a lot of the bikers in Indy for the weekend. Jordan, Batman, pulled me to a bar about half a mile away from where I was running games. We didn't end up getting any beer because apparently bikers en mass don't drink beers darker than Bud. But hey, I didn't drink but I got to dance before getting back to my games.

Now the break on Saturday between 9-Midnight is notable. First off, it was a surprise. As you might have noted before, I dropped off a single player showing up at my game off at Peryton's Qalidar session. But I headed back to the Canterbury's bar. They had, according to the menu that got me into so much trouble over the weekend, "Live Jazz."

And once again the restaurant-bar did not fail to provide . The live jazz was provided by a trio of music students, from probably the best of Indianapolis-based students of higher culture. How would I know this? Because I heard the best renditions ever of Blue Note records from 35 years ago, sticking to how the songs were originally played. I closed my eyes to hear how the trio was doing rendering some classics. But every time I peeked, certain people were watching me enjoy the music being played. Finally, I just opened my eyes. Though not anybody working the bar would've noticed that I was isolated. This is because people wanted to talk.

From there, the party of Saturday night started creeping towards me. The band had stopped playing while gamer dorks thrust forward to work their magic on the female saxophone player and the cellist. The drummer had nothing else to do so he just drank. So, from my single chair in the bar, I ended up getting intimate with Steve Bergeron, his beautiful and learned wife Cait, Cameron MacDonald and the every sexy Ashley Dinning. And this group was hanging with Chris Birch of Achtung Cthulhu fame. I ran into Steve and Angelia Parenteau from Carnage, which only made matters worse. Now more people wanted to party because I was hip with gamer hepcats. Not a good night for music. And though I wanted to fall into the spiral that is the Ennie awards and being an insider gamer at the Canterbury, I had a midnight game to get to. Amazingly, my drinks and socializing worked right on schedule, as I went into radio news mode, a job I had in college. I was not late to the game.

The whole of Sunday was pretty much a party. Peryton made a point that it was her day to open the booth. I chatted up a fellow at Canterbury's restaurant while enjoying their Sunday special of "Gravy and Biscuits All Day". Then Jordan and I did lunch with James and Dawn Sutton, Sligo and Cram showed up just in time to come along as well. We did the lounge at the Crown, funny how popular that place is for folks trying to avoid the crowds.

The booth breakdown took all of 15 minutes, which took Colts Gal (Jordan's Amy) and Bruce Wayne by surprise, as they had ordered lunch at the Canterbury while waiting for us. Sligo and Jordan had some secret scheme that was going to make everyone very happy. Peryton threw her support in because she was on a buzz from her massive successes this year. So it was a "Let's make a non-Tom plan" kind of like party. When it entailed no one being able to rest or eat at a nice sit-down place without games in front of them, it mostly just annoyed everyone that was not Sligo or Jordan. But I did get to demo a game that was pretty awesome called Spark 500. 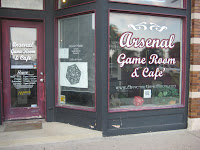 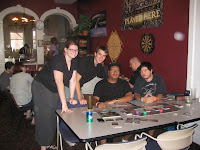 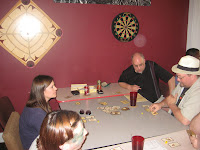 Back in the car I felt compelled to lecture Jordan that I didn't like being driven around to meet local friends of his who didn't feel compelled to go out of their way to meet me either, while sticking to some haphazard schedule that kept me busy after a long weekend of keeping to a strict schedule and talking to strangers who wanted to talk to me. Constantly maximizing potentials works with investment and in maybe in corporate social functions, not people on a vacation. If only Caed was around, she is very good at seeing these sorts of situations coming. She'd have whispered to me, "Go catch a nap" before I agreed to the group dynamics of earlier. She is my youngest sister for a reason.

At Bourbon Street, and on time, the place where I told a number of people that I was going to be that evening. It'd seem that none of my intimates wanted to be there, though no one had told me, except Cram. I had the pleasure of being dumped off on the corner with Peryton and McLea and his Amy, while the Indianapolis natives sped off for elsewhere. Mike and Amy were kind of the lost souls in all of this. They had just wanted to go out to eat, but the man's leg is a little gimpy and the restaurant is about a mile from our hotel. We thought that we were going to have to call a cab not having our own rides. Luckily Jordan swung by again, wanting to say good night properly. He gave the two a ride back to Canterbury, the spot that he had had his second lunch in three hours, watching them starve while waiting for him to drive them to where they thought they were going to get diner earlier. McLea and I would speak of the afternoon's events where he'd conclude, "You and I were the only two people that knew what we wanted, while everyone else drove."

Now able to sit back and enjoy the evening with Peryton, and a couple from Arizona and another from Kentucky, which I can't name for "game security" reasons, we were having fun again. Being out on the balcony was awesome. A bikers' party and our own blended together, and jokes about the structure collapsing commenced when a fellow named Alex expressed anxiety feeling a little bounce when rumbling vehicles, like his own motorcycle, went by. 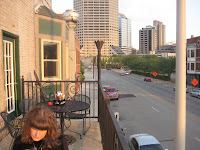 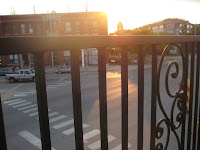 After our new traditional walk from the Bourbon Street to where ever we are staying, we hooked up with McLea and his Amy, let's call her Power Girl from now on for obscure reasons. Cocktails were had, and I played butler with cheese and crackers. I got a kick when I realized that their bathroom had a window just meters away from a walkway to the mall. With the shades open the whole world could admire my awesomeness. Pity no one was there at that time. One has to love the Canterbury.
Posted by Tom K. at 2:50 PM