One Night In Parma

Well actually it was a noon until about midnight in Parma, but the effect was the same.

For some two years now, despite friends like Rook and JerryTel being there I have been unable to attend the Holiday Game Bash, which is sponsored by our North Coast Gamers--Cleveland Chapter every year in earlier December. Actually two years I did attend for a couple hours before having to go to work that night, I remember something a large picture of Christ looming over my shoulder and having to sit in a toddler-sized chair while playing in a play-test of early Qalidar. And last year, Pery and I met JerryTel for a brew and late dinner at Applebees after my then new day shift. This year, I resolved to just go ahead and take the day off of work and have someone cover my first 4 hours the next day, to allow for so real game day festivities. 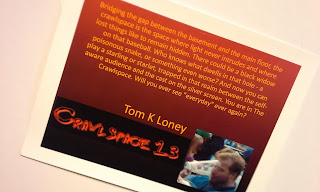 Despite having bad dreams the night before of a homeless hippie wanting to look in my diaper, the 2013 Holiday Game Bash was a pretty awesome game festival. It started at 11am, but we arrived around 11:30 because my game went first at noon. After parking up the road a bit, we didn't see the big parking lot across the street for the Rock City Music Hall where the event was being held, we made our way. Staring as I walked in was an advertisement for my game Crawlspace 13 with a lovely picture of me chugging beer out of a pitcher from GenCon 2012 (actually one of my favorites). Wow, I've never been so promoted before, and I didn't even pay for the honor. We found JerryTel setting up for his run of the board game called Rheinlander, his kraut envy surprises me often. We talked him into having a quick beer, actually he might've had a coke, before things got started. 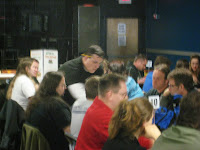 I set up for "Corporate Raiders" which is my introduction mostly for myself into the cross genre world of time and dimension travel role-playing. I use Robin's (Peryton's) Qalidar: Resistance setting as the scenarios excuse, and this time I even tried to know some of those darn D20 rules of hers. A friend of a friend, JohnM. came over and after a few minutes talked me into running the game that I was there to run. I was reluctant because he was the only player, but Pery jumped in as a Character as well a rules coach. And what a great time it was, I finished Raiders, finally after a false start moths earlier. And that false start has been bugging me because I've never did a time/space travel RPG before. I think everyone else in the game was bored, but I was having a ball. Finally my Pyramid-heads, Glam World special forces, and Sewer Monkeys were able to sing out in their own voices!

After the game we found JerryTel at the bar drowning his sorrows at having successfully sold five more poor souls on the game Rheinlander, who'd probably never be the same again. Actually he was having a coke and checking on English Premier League scores and checking out Trollhalla on his tablet. I was in a celebratory mood so I made everyone, JerryTel and Peryton, have a fermented sugar beverage with me. We had a couple hours to hang out and be dorky gamers, and game designers, as well get to know the bartenders who jumped right in on the fun. 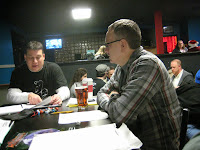 My favorite moment of that afternoon is when I think the owner, or one of them, saw us and the staff having too much fun, so she felt she had to come over and tell the bartenders that "The Game was supposed to be on TV because everyone here are gamers." Everyone in the place had come from the game festival from next door, and no one cared about any of the college football games on the flat screens, though a couple folk had a penchant for heavy metal on the juke box-- the Ohio State game wouldn't be on until 7pm or so.

Robin's Qalidar scenario, "The Typhon Project" drew myself, a fellow who I believe is Ken, not Ben, and the late arriver JerryTel. Robin after getting the basic plot out where we the players had to figure things out, decided she was bored and threw antroids into the adventure just for laughs. I could tell she was improvising, but we still figured out what was going on and everyone at the table was still kind of awestruck. 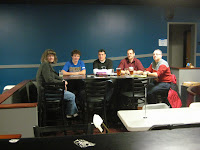 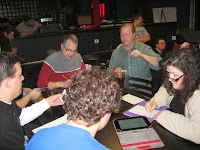 My "late night" session, starting at 8:30 filled up before 8:10pm, and I had to make sure all minors, all one of them, were ready for r-rated role-playing, meaning his dad was playing as well. And with technicalities finished, my official "non-playtest" of Crawlspace 13's "Party Nights" was underway. It was a very good group of role-players, but to date, I can't say that I've had anything but when it comes to Crawlspace. One of my players, Mary had to slip out early because of family necessity, but I hope she shows at later sessions because she was as strong role-playing as the strongest characters there. Before I knew it, it was 11:30 and time to wrap things up. So things didn't get as gory horror movie-like as they were supposed to, but the players had done a great job. They'll have to see what what the Apogee story-arc for Crawlspace is going to be like. 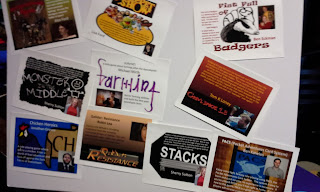 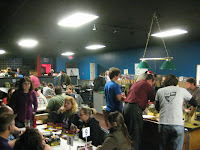 We closed the evening with a late dinner with JerryTel at Applebees once again. I had a great time and though 14 hours straight and having to be at work the next day is kind of tough, this has to become a yearly tradition. Good job North Coast Gamers. Good job.
Posted by Tom K. at 12:37 AM