Toledo For the Tacos, Part 2: "The Incredible Loosening"

As nobody, except Curly and me, was up for a late night meal so Pery and I did our Del Taco run a night early. This joyous event usually occurs on late Saturday night. The wife perked up enough to eat tacos and re-pack, two favorite activities of hers as far as I can tell, and ended up asleep sometime after me. Upon the morn, we were actually not late for my 9am game, a pre-release Glow play-test called "Toxic Island." What happened is that I drove past a certain road and had to find a new place to park. And with that inclusion of two boring tidbits, my second day at BASHCon, began at 9:36am. I noticed JerryTel's table was already full though his T&T Stay Alive scenario "Gaslight" would start at 10am. Still being late was helpful, I had three players, including G'noll, whom had shown up before myself and was breathing easy, upon my arrival.

Glow's "Toxic Island" never got to the island mentioned in the title. We were having a bit too much fun running through the Character Creation rules. I think my approach to both mutation and androids were a strong point with the audience. Then when I started in with some of the milieu of my personal campaign, the players started running with it all by themselves. I sat back and actually started working on some notes for the weapon tables with only the occasional head pop up to do a GM thing here and there. Thanks to this session, and LinZ the editor, I have a task list of things to have done before the very close official release of this game. I also am hopefully convincing young, compared to me, TimS into becoming a GM for the game at GenCon and elsewhere thanks to this session.

My next game, Wobble's "The Eye Of the Needle" had only one player show up, A.J. . Apparently A.J. is a man to be reckoned with because I met somebody the day before that claimed to be him and the dude offering to show me his driver's license was not that guy. As it was only him and me at the table well past the start time, I refunded his ticket for the game but waxed poetic about what Wobble was and what it wasn't. I gave him the scoop on the scenario's plot, and we talked about who we were as persons. later he'd introduce me to his significant other. I want to do a "Wobble Weekend" out in his neck of the woods this year, between Detroit and Toledo, to get these scenarios worked out, and he is definitely a good prospect for a Wobbler. 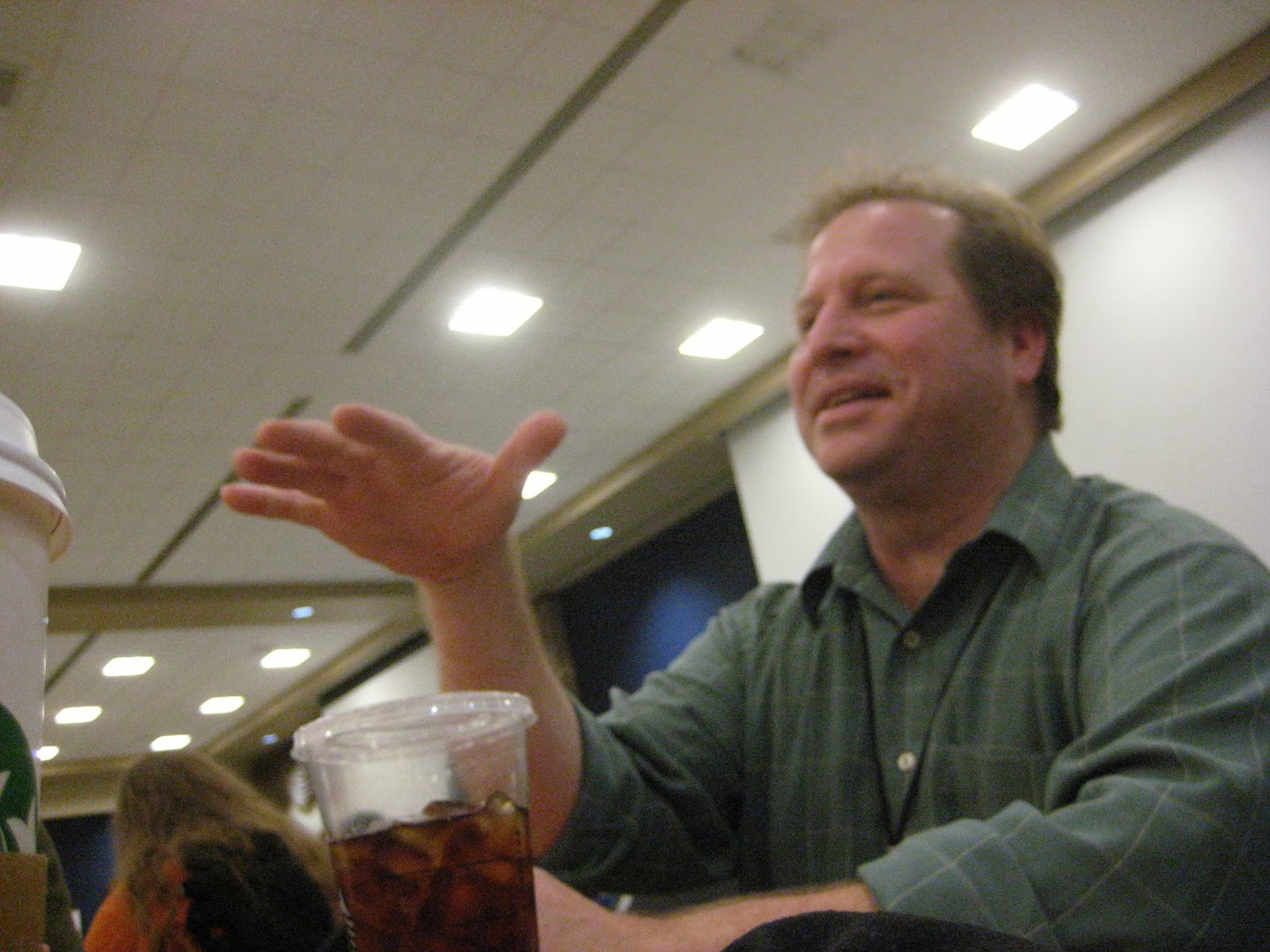 I was still able able to show up for lunch with JerryTel, Pery, and Curly, once again at the Phoenicia, where two of JerryTel's friends, where competing at alluding to the most obscure tank and/or artillery battle ever, I hear that there is an award in Cincinnati for this feat. Neither did too well, as I was able to jump in and keep up nicely. I even steered the conversation towards wintertime biathlons.

Well thanks to the Wobble game washing up, I was able to jump in on Robin's, err Peryton's Qalidar Resistance scenario, "Liberation of Katum." When it comes to her game, I've been trying to learn the game system by jumping around from Class to Class and trying them out. This time I chose to play a "Tinkerer" as opposed to the "Mystic" that I tried last time. As for my player's performance in this scenario, I get the notion that I am going about things backwards. Pery described her game's Mystic as "Essentially a Jedi." Well last time I played a Mystic, and knew too little for my scope of play, and this time I was focusing on the minutia while understanding a bit more about the universe around me than possibly the other players around me. In any case, in both scenarios, I never ask the right questions. First off, I did not know the title of the adventure that I had signed up for, missing clues from there was not hard. In short, Katum was not liberated, but we did Greenpeace proud because not one of the Characters is stuck in a Russian prison.

At dinner, Curly announced that I was his favorite uncle. As far as I know, he's my only nephew, fake (nee) adopted or otherwise. I chose this opportunity to start lecturing him about my pet peeves, which, as everyone knows, one should start to get this out and in the open quickly-- I was sitting next to him at a dinner table and he was doing a muppet's rendition of how a human being eats. And I learned this doesn't work with teens. Anyway, I frankly have liked being the weird uncle, I have been that guy since I was nine years-old to my nieces.

My evening game, had only Curly and Gnoll, who was once again late and out of breath (I felt much better), so I changed the venue. Instead of 70s-Disco-Meets-IFC studios horror ("Party Nights"), I went with Hammer Horror. More fun, for me, to have ever had, I reincarnated the cheesiest NPC I ever developed (for T&T in the early Naughts) Count Vulgarr the Vampyr. Oh my goodness, never before have I been so rejuvenated by the familiar before me. Curly, does about the best Liverpool-based accent that I ever heard, and Gnoll was channeling Jeremy Iron and Boris Karloff. Wait until you see the next Crawlspace scenario. 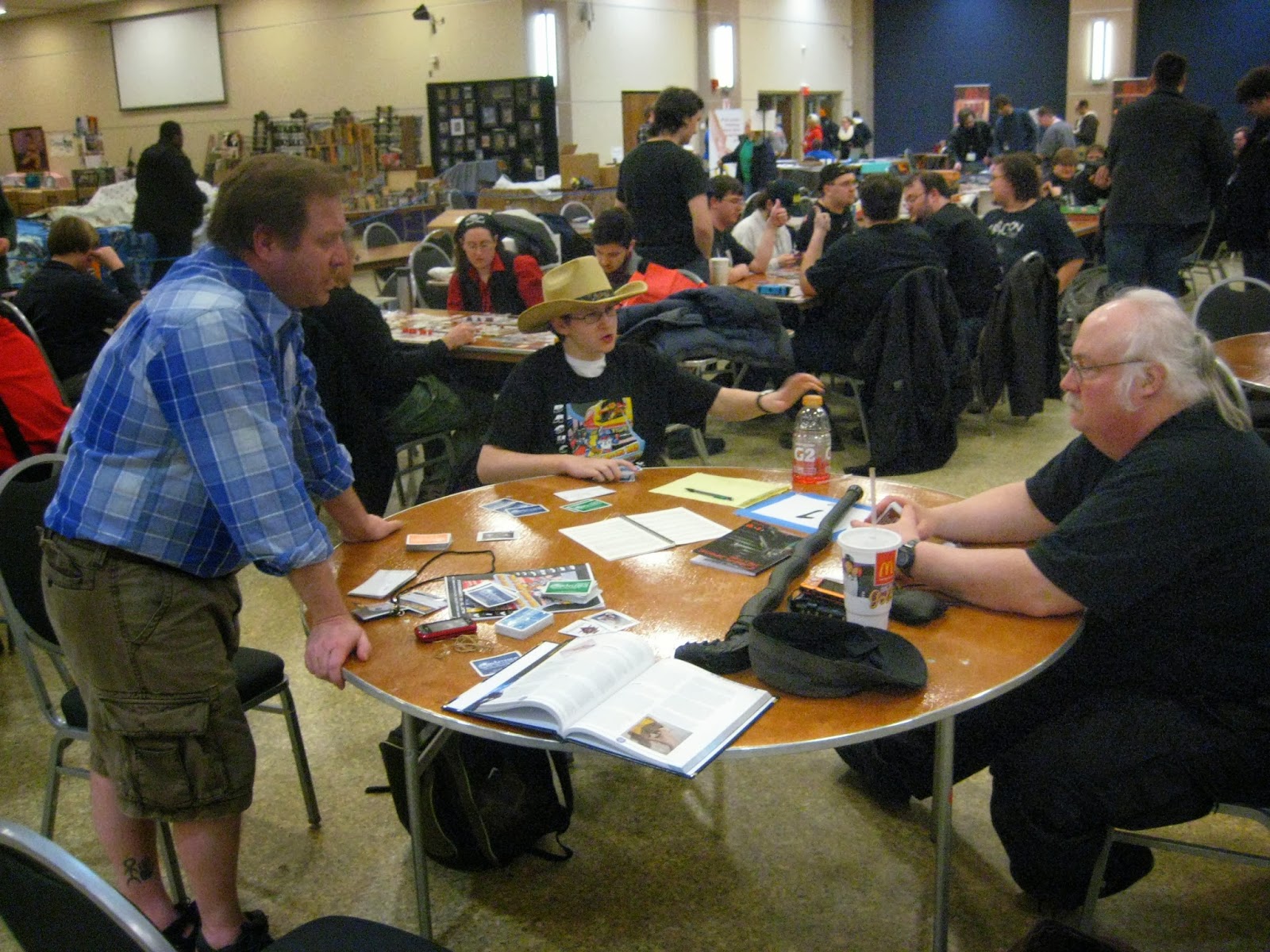 In case anyone has never noticed, I am all about the dialect. Before I could take no more, I got to put American sub-titles under the Late English language into (current) American for the (indolent) Toledo-speaking audience. It was fun, and I am not being carcastic. Okay all the clues were ignored and I kept having to be a railroad man to keep the movie err story going, but overall it was a great time. I actually remembered why I loved Hammer Horror films so much. Mind everyone, I think that my plot twist was three steps above any ever provided by Hammer Studios and my cast was awesome despite the lack of an central European hottie willing to show some boob.

Energized by having such great players, I was overjoyed to hear that JerryTel was up to a late dinner. Curly behaved himself at the dinner table, conversation flowed. I learned that G'noll was a vampire literature addict, on top of having the best voice ever. And we met the folks that is always making him show up at my late, out of breath, and too busy to participate. They're really nice.
Posted by Tom K. at 5:13 PM