I often say, if I don't get a road trip every ninety days or so I go a little crazy. And considering that my last road trip, farther than Parma that is, was sometime in September, I've been going crazy. And those close to me, like poor Peryton or JerryTel, have been suffering for it, because as one might garner from my writing, I am not a stranger to mad foolishness in the best of times. This last weekend though was BASHCon in Toledo, so a chance to get out and about. Pery couldn't even complain about anything because she doesn't even have to take anytime off of work to come along. Though she did endeavor to make us as late as possible, which I somehow foiled her machinations this time around by sticking to the "getting ready" schedule I have worked out in my head weeks before any convention. I can't even complain about getting into the joint this year. We arrived around 5pm and before Pery could buy coffee and muffins from the Starbucks downstairs, I was registered and paid up for the weekend.I think her registration time was over five minutes but less than six.

It was wonderful having a nice leisurely dinner at the Phoenicia restaurant in the Student Center of the University of Toledo. JerryTel and Curly, JT's stepson and a long-term gaming group member of the TOL-CLE corridor showed up at 7pm. They could only complain about having an idiot at the registration desk, not the length of time they had to wait. Met Dan Hembree, fellow Trollhallan, when he arrived promptly at 7:55pm at my Friday night T&T session, "Goblin Hack: the Bloodying." G'noll showed, as he frequently does, late, breathless, and too busy to jump in. Andy, of various sessions over previous years, swung by and decided to watch the game.

A brief aside about Prof. Dannherrrm, I am told that he is an actual professor of Geology as well as T&Tology, is that he is one of the bigger movers and shakers of our little tempest in the T&T teapot. He runs The Lone Delver Games shop. He is also the author of multiple scenarios, such as "One Of those Nights" and "House On the Hill," both of which are on my Troll-shelf. He also has been the managing editor, well THE Editor, of Trollzine for the last two, maybe three, years, which is not an easy task. If there is someone as committed to the cause as me, frankly this man makes me look lazy. 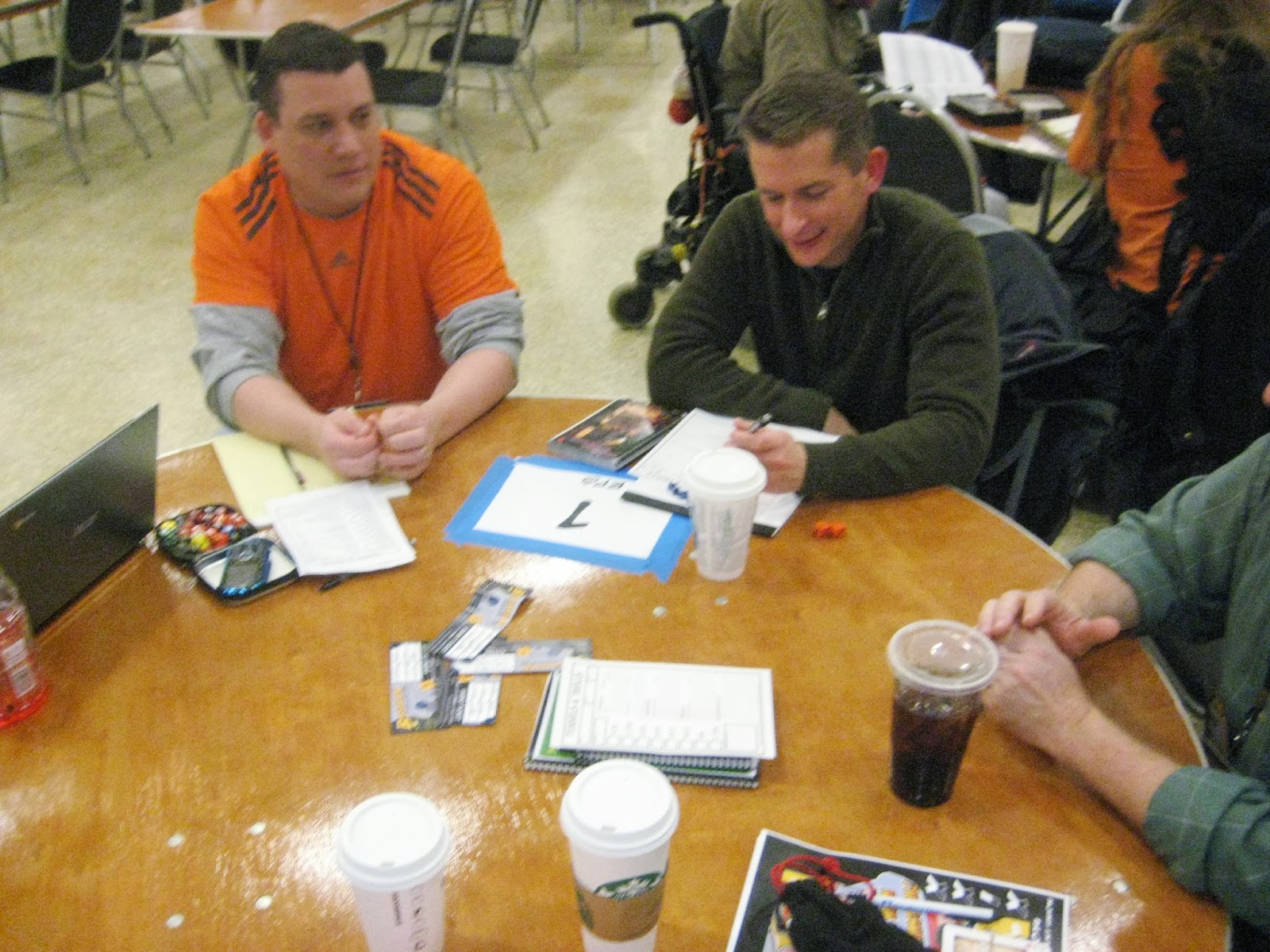 Now about my "Goblin Hack: the Bloodying" turned out to be the sort of gaming session that I live for. I had the story typed up about two weeks ago. The matrix for T&T being what it is, I wrote down four Monster Ratings (MRs) and had an algebraic equation for a battle scene, about a week ago. At the table, four very good role-players, that also were familiar the rules, who had their own pencils and dice. At the table I rolled a d6 to determine the SRs, Saving Rolls, because this was a "play-test" for publication later, which gave the session an edge of surprise for both the players and me. The flow of things went swimmingly, though the player-characters would disagree. And I had fun doing my interpretation of the Goblin King and illustrating what the cavern-fortress of the goblins was like. And then I got to dig into my very own creations once things got really low. The one flaw was forgetting to give Dannherrrm's Character 2dxd6 more points for his 2nd Level Character in this 4-6th level scenario. Of course, I cannot have perfect gaming and game-mastering come together at once-- I bet my head would explode right there. Still it was quite a lot of fun.
Posted by Tom K. at 2:02 PM

Hi Tom. Thanks for the kind words. Goblin Hack was a fun game despite poor Garik's many misfortunes along the way. It was great to finally meet you and Robin. Keep me posted on any new games that you run.