Never thought I'd say this, but George Clooney is protector of film making in fantasy film-making. Big name actors in moderate budget sci-fi movies have been a pleasant viewing experience of late. I tend to put science fiction movies of recent years into two categories; Pre-Peter Jackson and Post-Pete Jackson. Mind you, I put Peter Jackson's Lord Of the Rings movies into a category called "Video Game Industry Castoff," but the man's allowance from video game marketers, has been a boon to everything fantastic in the blockbuster movie industry. With the quantity of products everyone can find something interesting, of course most of it is for kids or the parents who are now missing their one-time life as sexual beings. 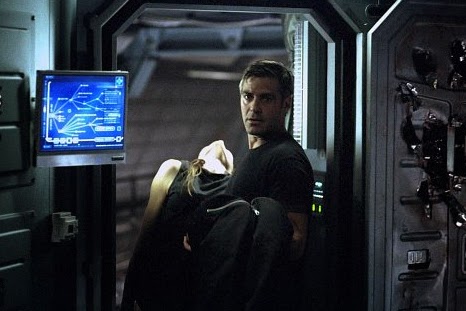 But for quieter, sound studio-driven science fiction pieces that delve into existential plights of being human as well our place in the universe, one has to thank George Clooney and whoever was behind the remake of Solaris. Though the amount of fantastic, err phantasmagorical special effects available could've turn this flik into a video game homage, the plodding storyline came to fruition in the same pace as in the story by Stanislav Lem, and the original film Solyaris. Even as the film degrades into metaphysical tripe and Freudian psychology, Clooney, and that dude named Sonderbergh, don't flinch, making the sci-fi about existence and avoiding an explosion for a climax.

This has made room for conventional sci-fi themes, not about puberty and popularity, to emerge trying to tackle social issues with other big name stars (Matt Damon, Tom Cruise, et al). On a mundane level, this has led to Liev Schreiber to present space zombies without a Doctor Who (The Last Days On Mars vs "The Waters of Mars"), and Sandra Bullock getting to be a space heroine in Gravity in films that strove to remain nuts and bolts science fiction.