One of my more intimate local friends Beckett Warren told me that he had been published in Chris Kelso's Slave Stories: Scenes from the Slave State so I picked it up a couple of months ago. As you already know I have been delving into dystopian-visioned works for a few decades already, so it wasn't a stretch for me to get into and this collection of short stories has many authors tied to Cleveland and its surrounding parts. Heck, the day I finished up the book, I brought it to read over breakfast in a nearby diner and noticed that one of the windows was being replaced after being shattered that very morning-- Do you want to talk about the feeling of synchronicity? 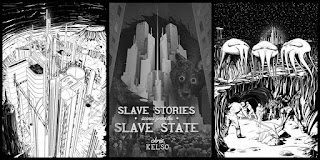 It seems that Kelso had created a setting and then asked various authors to help him fill out the streets, back alleys, and by-ways. There is the big city Wire City, its inner suburbs of Ersatz and Spittle, and the surrounding backwoods of Shell County. Off to a far edge of my imaginary map is the fill-in-the-blank city of Moosejaw. Almost thirty authors jumped in to help along with four artists. Like a punk rock album the reader gets a lot of economy out of the product.

Also like a punk rock album, one has to be prepared for what lies within the jacket. The authors draw the contradictions of everyday life and blend allegory with surrealism to make some tales that would have Absurdists like Beckett (Sam not Warren) and Ionesco feeling comfortable. Others might feel a bit less comfortable, especially those where sexually explicit language and situations are concerned. While the overall effect isn't too shocking, come on folks listen to high-schoolers walking home already, it can be a bit jarring. Then there is the strangeness that the reader has to deal with.

To name a few of the works:
I enjoyed Mary A. Turzillo's "Crime Against Nature". Here she delves into transhumanism, a term that would baffle me if not for folks in life. Her language as a virus pun is awesome.
Clive Tern's "Shell County Vodou" is a fun romp into employee politics.  My favorite story in the collection.
Be prepared for Preston's Grassman's "Interstate" sordidness. It depicts injection drug use but with a twist.
"The Coin-operated Man" by Gregory L. Norris, is about the most traditional work in the collection for the casual sci-fi reader. It is very well placed in the setting but is a take on the hard-nosed S-F adventure fiction of the 30s through the 50s. Mind you, don't get too comfortable.
Beckett and Tony Yanick, also a local friend, writes "Tribes of Neurot". I hope the reader is comfortable with his body, and its own flora and fauna.

The collection doesn't get boring, especially with the wide range of writing styles from the twenty-nine authors included. The subject mater tried to be new and different for the reader. I suspect that is more for removing its audience away from their comfort zone than novelty. Some might be easily shocked by this, but readers of authors like Kathy Acker and Samuel Delaney, heck even Bruce Sterling or Pierre Boulle, are going to be a little dissatisfied. I suppose what I find lacking is that once one gets over the fear of being in the slave state presented, no one digs into the factors behind it. We only the fact that nobody likes to go work, sometimes it even shows us why, but not often enough. The work is still refreshing and interesting enough to be a "Bigfoot" of a read.