Well I saw it. The cultural phenomenon known as Star Wars: the Force Awakens, which the build-up to over the last couple of years has been a lot fun. Everybody I know has been waiting for it. George Lucas got to go see it first and be passively-aggressive and everyone got to be snarky right back at him. Folks I know have missed work to go see it on the midnight of the day that it publicly aired. Last Saturday I even heard the movie, with pretty bad sound quality, wafting from a cracked window in project housing. Seems to me everybody is getting in on the festivities. As late as Tuesday, the mega-cinemas around my neck of the woods were doing pretty brisk business. The last bit was a nice night out for sure. 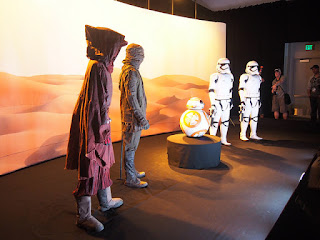 It only me took a few minutes of watching TFW before I realized that I didn't have to be spellbound. Lucas Sound sound effects creeping into my left ear, but not my right ear, reminded me of that-- the "immersion" just went away. After a while, it wasn't just J.J. Abram's blurry action scenes and grating sound mattes that was giving me headaches. By the middle of the picture, I realized that it was production decisions by the movie-makers that were bugging me even more so.

Why was Max Von Sydow in the movie? More over why couldn't he have real role? He is an actor of that stature, especially in the "genre" films. You know like the rather well-known Alec Guinness, Christopher Lee, and Peter Cushing in the originals and the prequels? Von Sydow is cardboard cut into some scenes to grant to franchise some big name credibility to the new film's opening, and then lost to formulaic scripting and production decisions that he'd cost too much later.

The writing wasn't bad though the plot was a bit confusing at times. Plenty of Nazi fetishism for the cryptofacsists while having both girls and boys play strong roles to placate the Outrage Brigade and their auxiliary of helicopter parents. The character development made me feel clever as I was able to figure what everybody's response to this or that dramatic decision seconds before it happened, though in truth I learned this from watching Buffy the Vampire Slayer episodes irregularly. So in short, Disney knows how to make movies that a lot of people will want to see.

Like Hamill, Ford, and Fisher the young cast members are all wonderfully talented actors and actresses, complete with some appearances in various Law and Order franchises. This is rather like the "unknowns" of the first Star Wars flik, where all three of the main characters had been working on TV and the Silver Screen for ten years at least and not really that unknown. I am sure that they are all going to go on and become more fully developed characters, at least for the good guys.

For the bad guys, I am worried. Do you member how you knew to be scared of Darth Vader when the skin and bones Moff Tarkin strode up next to him? Well, imagine two young men in their twenties, one is Aryan-ish and the other lion of Zion-ish, and despite WWI Central Powers' uniforms both look a little soft around the edges. They both kneel down to Smeagol who is playing the Wizard of Oz. Even the lacky bad guys are poorly presented. Interaction among our "heavies" is more like Mean Girls-meets-Teletubies than say the Force Ten from Navarone.

Visual-wise the sci-fi is kind of Star Wars-y but more CGI stock footage than much else. Locales were well-known vacation spots in Ireland, CGI, and a backlot filled with sand. The "rathtar" aboard Han Solo and Chewie's big space junker, J.J. Abram's proudest contribution to the movie I'm sure, have been in about every weird horror flik since before TSR wrote up the Phaerrim. The ships, the ones that we could actually see, there were many blurry suggestions of ships, were either from earlier films, or boxes. 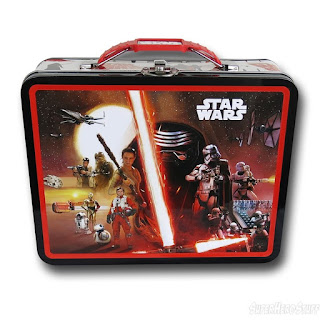 Overall the film is something of a Big Foot, on a scale of Godzilla to Smurf. Will I go see the next release? Well, yeah. What else do I have to watch that is space fantasy with a decent budget? I would to see some old fashion competition among the film studios though that would provide subsequent styled films, but aren't the same franchise.
Posted by Tom K. at 7:12 PM