A couple of days ago I was able to remove my FacetuBe photo of an outtake of the Joker and Harlequin from the Suicide Squad movie. I had put it up when I first heard about the movie from supernatural comic book aficionado Ben Lathrop over a year ago. I promised myself I wouldn't take the shot down until after I had seen the movie. Considering I have been wanting some "street level Batman" since the  mega-apocalyptic installment of the Nolan Dark Knight trilogy. Frankly this looked like one of the few chances, I'd get for it back then. So while, I've always been more "meh" about the title featured than anything else, having both the Batman and Joker (the two "mythic level" icons of the DC streets) appear in it as only side characters meant that the DC comic book "street level" universe was going to be explored. Going to see it last Monday was the perfect finale for my vacation which had centered around GenCon. 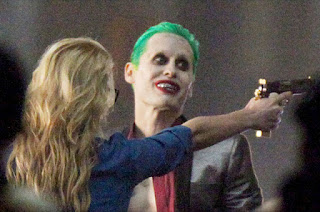 I loved the movie . I am going to go see it probably two more times in theater and then buy the DVD and then watch it again. Then I'll watch the Blue Ray version available only online for me because those machines just suck.

The strongest point was the characters. With more main characters than Sergey Eisenstein's Battleship Potemkim, the story-telling still works. While Will Smith still eclipses the sun in this movie, the cast around him are allowed at least one shot each along side him. Guess what, Will Smith's Deadshot is a devoted parent with an unseen spouse off some where else in the world. Each of the characters do show some personality, will the direction and writing showing their individuality.

Especially nice is the fact that the audience is encouraged to find the hidden aspect to each of the protagonist villains as well as look for what makes the good guys interesting. Killer Croc is the scary Black Man that we all have to learn that he is indeed human. Diablo is the reformed esse that just can't ever go back. Enchantress is the cutting, goth girl that cleans up nice enough to bring home to mom. Captain Boomerang lives up being as big an ass, yet real enough guy, as anybody that would use the word "boomerang" in his nom de guerre. Amanda Waller is that manager down at the Unemployment Office that doesn't give a damn about your paperwork emergency. Harlequin is the liberated woman that is still daddy's little girl enough to be reminded that she is a victim of Stockholm syndrome whenever a villain needs to be self-righteous. Flagg is the capable hero that is just a little too self-indulgent to do much good for most around him. Slipnot is the gullible kid that we should all try not to be when we're 14.

Meanwhile Batman and the Joker never get too much depth. That works for me because I want more of them later and not from a whizz-bang production like this flik. Jared Leto has a pretty full vision of who his Joker is, though I suspect that the film's makers willfully decided to not let us see much more than some teaser material.

The action and the formula gets a little plodding and mechanical. I guess the editors and writer took a bit too much of the criticism of BatsVSupes too heart. The main characters, all 2,000 of them, are introduced in about 45 minutes of trailer material. The rest of the plot unfolds in "A to B to C" fashion and the twist leads to the final face off with two, not just one, boss monsters. I guess Ayer, the writer figured the over-used flashbacks would provide the magic required for the silver-screen to have emotion bamboozling to make it a truly memorable film. He should've just had the flashbacks be the action for the first 45 to 75 minutes, turned Enchantress and Flagg into a real love story, and then let Waller take over the world. The climax sequence, could then be the wonderful Ghost Busters homage that it was meant to be without feeling guilty.

Still the product good enough for Hollywood intellectuals to feel clever enough, with the revenue to prove it. Though I rate this movie a Bigfoot, on the Smurf to Godzilla scale, it'd be nice if film writers would write just a bit more than the comic book writers that they are getting their "inspiration" from.