And into Halloween Season

So this Halloween isn't going to be about dedicating myself to watching a list of movies this year. I can't think of any right now because I have been watching a slough of horror flix from various release dates throughout the year already. I have been reading and writing a lot over the Summer months, so maybe I'll celebrate in that mode.

I hope to publish the now six year-old scenario "The Horrible Fate of the Haunted House Hunters" this month in time for a release date around the week before Halloween. It was originally a CoC session, but long since evolved into a Crawlspace event. Since it won't be on sale or "Pay What You Will" (or "Take it please I only only want hits") at Drive Thru RPG, I doubt that the timing will boost initial sales, but hey I will feel great at doing for the season.

Reading something new horror from a known contemporary author, like say Ben Sperduto or Dan Mills or Richard Lee Byers, is one way of keeping it real. I also have the original run, 1983 or 1984, of House of Mystery's I, Vampire in a TPB somewhere around the library. I think I'll finish it. Maybe, I'll look into some of Marvel horror characters as well. 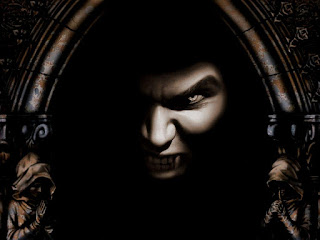 Over the weekend just before Halloween, I am running two Crawlspace events at Beckett's new game store Weird Realms. They were supposed to be a part of grand opening festival, but things have been pushed back, so now the sessions will be private parties, over Friday and Saturday evening. The planned scenarios are "Detroit Death Metal Audition Apocalypse" for Friday's giving, and then "Ghost Story." G-Story is the actual sequel to The Horrible Fate. Though it isn't a Hoot, I intend on doing some serious party gaming here. Since we don't have to worry about customers, I am sure the other attendees will be in the mood as well.


Luckily I am off on the 31st of October, hmm maybe I should re-read that Zelanzy novella, so my porch of spookiness will be up and running. I am already buying candies, all of which have to be produced in the USA for this most American holiday, and have some props from previous years ready. I just might put a bit more effort than usual into the night's festivities though.
Posted by Tom K. at 10:47 AM