NoGenCon Hoot 2020: When Cometh the Moth?

So with GenCon being cancelled this year, our gaming clique, the serious ones at least, got serious about doing the Mothman trip that we've been planning since like 'o7. Peryton and I started out a day earlier than everybody planning on attending. So on Wednesday afternoon we pulled off I-77 in New Philadelphia, Ohio for lunch.
"Hey look the Towpath Tavern." Robin noticed. "But we don't have time for that."
"We are headed to a Quality Inn along the Ohio River coal-burning Valley," I replied. "A day earlier than anybody."
"I wonder if they have decent onion rings, let's find out." She answered.
When we got moving again we decided to listen John Keel's The Mothman Prophesies to get into the right mood. 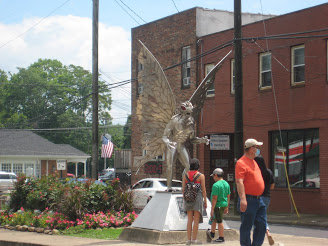 We made it around 5pm and did a driving reconnoiter of the Point Pleasant, WV/Gallipolis, OH before just settling on finding the named motel. Waiting for Caed and Ravish(Rodney, Caed's husband) to show up in the evening left us with some time to kill. It would soon be raining, so we had the excuse to sit around the room and read game books and nap all day. I still did a little walking and found where I think the original collapsed bridge was. 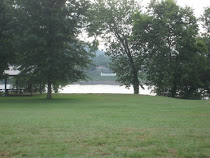 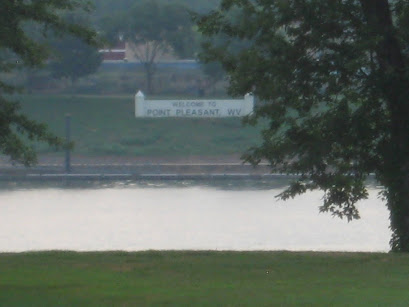 Getting text messages on my phone, I realized that it was already 6pm and that Robin and Rodney (Caed and Ravish) were there. We met in the lounge of the hotel, I stand corrected from my earlier assessment of Quality Inn, in our usual trickle in fashion. The men first, then the women; my wife of course being the last.
The Old Home Week Evening was awesome, as it usually is. If we all hadn't been practicing in front of mirrors for an entire month, there was some serious note taking and stage details worked out before hand. The storytelling with only four of us there was worthy of a Tony Award at least. Well, at least mine was. I mean who else would I be listening to hear my own beautiful and rich voice? 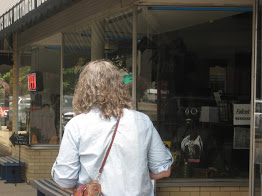 The next day, everyone was a little hungover but I was able to wrestle everyone from their nap spots and out the door to do the shopping part of the trip done while we waited for new Tom and Saharrah (Tom Too and Sahar) to show up. We texted them and told them to meet us in town. When they arrived, after Pery had spent 200$, and treated my fake niece and her betrothed to admission to the world famous Mothman Museum.

After the pleasant afternoon in the hot sun and fresh air in a quaint smaller city's downtown area, it was time for big dinner with the whole gang assembled. Then it was time, after a quick nap, it was time for the important stuff. It rhymes with GAMING. 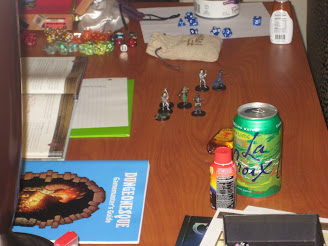 Everyone wanted to some serious D&Ding so I acquiesced and even played. Still Pery would not let me play an one-eyed half-ork general because her long session was set in Middle Earth. Hey I saw the movies, there were orks in them. She's was just being Character Class Racist. I need to get a Twitter account to rake up some fake controversy.  I mean somebody got to play an elf girl with no hit points to speak of.
The game ran from 9pm Friday and into the late afternoon of the next day. There was some sleep time and a big breakfast so we all could bug our latest favorite waitress, Lezza (just call her awesome). I believe this is what "true gamers" hope for. So unlike my three to four hour quippy sessions that I run at GenCon and online for the rest of the year. I had fun, but I couldn't help but feel like I was clocking in when restarted.
After that game, our gang deigned to allow me to run some Crawlspace. Came up with a session called The Funeral using a couple of seeds from some scenarios knocking around in my head already. Around midnight, we cleaned up our mess and everyone could get some real sleep. The last session at the Hoot is always a test of endurance. 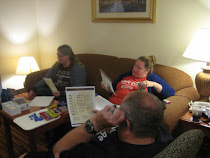 The next day, everyone slept in. Caed and Ravish slipped out so Tom Too had to pay the bill on their shared room. I bought us all some brunch, so Pery and I dragged "the kids" out to the TNT Bunkers so central to the folklore of the Mothman cycles of Kultura Americana. 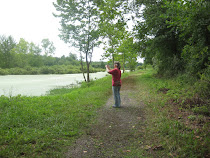 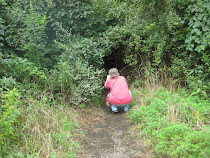 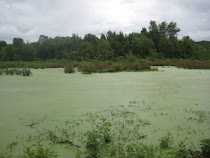 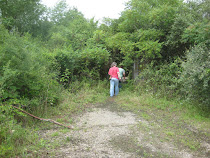 The bunkers are a nice low-level nature walk. Almost a mile and pretty well maintained, probably by the Department of Parks and Recreation. The bunkers are still temples of adolescent partydom, which sticks to fairly interesting graffiti. Our particular hike was just great. A storm system had rained just enough the night before to cool down the 90s into the high 70s. The scorching sun was mostly behind clouds (LOOK HOW MUCH SUNBURN I AM NOT!), and it's a real bog. The water was only mildly lawn fertilizer polluted, so while slime covered, it still looked like water not pea soup when big frogs would jump in. 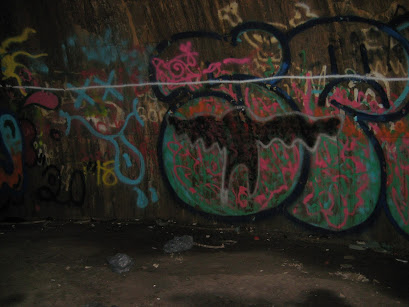 So we took our time getting home after hugging Sahar and Tom goodbye. We drove up to Pomeroy and up to Zanesville before finding the Mighty Road, I-77, to make our way home. We got to enjoy the lovely country air filled with smog from fracking facilities. Have to admit I was a little glad to get back to Cleveland where I get some fresh air.
Posted by Tom K. at 2:21 PM