Should've Been Written By Manatees. 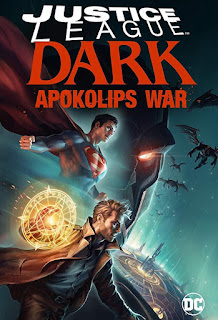 I just watched a movie totally cobbled together by an algorithm though three people are credited with typing it out after they read what a machine told them to. The process must’ve been:
“So like what do 30-50 y/o male comic book buyers like? According to sales of 40K per release Batman and Justice League. Then the whole supernatural caboodle with freshens things up for the younger crowd and hippies about 30K an issue in sales. Hey Nightwing, err Teen Titans pulls in the soccer moms and gays, they sometimes spend up to 20$ a pop. I hear the Frank Miller militia likes apocalypse, that’s another $2.11 for all ten million of their internet sock puppets. Stuff by Jack Kirby goes over big with the drunks, they spend 13k a year before their credit cards are declined. “Dark” sells and Matt Ryan is TV rates. Well there’s Justice League Dark and Darkseid. Two “darks” yeah. Let’s do this.
Don’t forget Harlequin because... Millennials.”

That’s what you get with Justice League DARK Vs DARKseid. Also called Justice League Dark: Apocalypse War which isn't any better.
So like Superman wants to defensively launch a preemptive strike on Apocalypse because Darkseid is bad and is coming for Earth one day. Just like the Netherlands did when they knew Nazi Germany was going invade as much of Europe as it could in late 30s, wait a second... . So despite coherent arguments to not do so, everybody sides with Superman. John Constantine known for his Justice League-ness these days, because supernatural comic books don’t sell over 20k an issue with their own names, is on the bus to Apocalypse. And the rest of the movie is a post-apocalyptic drama, see what the writers did there, where everybody gets what they want.

Superman being a self-entitled douche. Constantine being a douche canoe. 14 y/o’s saying “fuck” and dealing with parents. Kirby’s Fourth World gets mentioned as part of Darkseid’s milieu. The Suicide Squad does suicide with Louis Lane. Oh yeah Oa gets destroyed because why not?

A strength to the movie, if there is one, is the depth of characterization in the personas that weren't Superman, Darkseid, and the Swamp Thing. But that is not a hard thing when the task is write the closing act to a tale of doom and desolation. The movie should have been more interesting in the starting acts and then piece would've not been worthy of doing laundry while watching it. That would've taken humans thinking about how the characters should be presented at the start of it instead of doing coloring book plot exposition.

A definite Robomonster of a flick. I wish it had been written by manatees. Where was Jimmy Olsen and his Newspaper Boys?