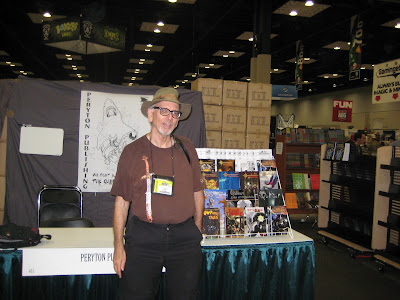 Some Forces Are Immovable
For all the shark discussion, the booth stayed pretty uneventful. We allowed one interview, Peryton wanted to do less. The Gaming Gang's, Jeff McAleer charmed us both into it. I remember the interviewer and Peryton asking me if there was anybody else that I'd like to plug or could we start talking about Peryton Publishing finally. Sorry but Jeff Werx, Tavernmaster Games, the Troll Hammer, Trollhalla, and Flying Buffalo Inc all are apart of the package when it comes to Elder Tunnels and my T&T products. Sales were dismal, and Pery kept finding little critiques of every time I tried a pitch, so I settled into annoyed boredom and did up player-characters for the night's upcoming tabletop sessions. Dr Nik would come by and join in with Peryton in the softly-worded attacks on my sense of worth as well for a few minutes. So it was like every other day at home almost. Despite everyone's best efforts I made a sale and won over a couple people. One couple celebrating the wife's retirement and commitment to coming to GenCon every year from now on especially brightened my day.

In the afternoon, I slipped off at 4pm, allowing Peryton to show me how the selling thing was done. Stopping in to see Jack at the Omni bar, he didn't mind when I asked him to turn the 15 year-old basketball game on TV to CNN. A gamer from the across the lobby rushed over and asked why we weren't watching Fox News. I think it was phrased "Why don't you turn on Fox?" When Jack asked if he wanted a drink, we got to hear about his diabetes and dead aunt, so we both stopped talking to him. The dude went back over to his boxes of miniatures and waited for his taxi to take him two blocks like he was before. We then discussed the Pussy Riot conviction in Russia, which had just taken place. Neither of us were very happy about that. A bit later, I met Peryton, Batman and Sligo for dinner a little later at Champions but had to slip off for my evening's games.

Ah to Have Wings
The first game of Thursday evening, I ran into JerryTel running his Game of Thrones RPG at the table next to where mine would be starting. No time to talk, but it's always good to see him.

My T&T scenario "The Balrog in the Basement" went well. Two of the players had come from Ken St Andre's session that morning or afternoon. And though only those two would admit it, almost all the players had a lot of experience playing T&T. What struck me most about the session was that it was easy to handle the players. Now every GM will tell you that there is always one very strong and vocal player, and there is usually one, maybe two shy players that might blend into the wall if not poked every now and then. And this time was no different. What was different was that the shy player, I only had one this time, arose to the occasion near the climax. He died a heroic death, but the man was awesome in doing so.

My deviant version of CoC's scenario "The Moonrock and the Astrologer" had Caed showing up. And the four other fellows were the relaxed and quiet types that I'd expect to find at the Thursday night late shows, that I have been running for years. And as usual, the educational level and experienced professional level of all the players, me as usual being the dumbest in the room, kept the game at a very erudite level of humor and allusion-- we were chuckling about blood sugar levels in little old ladies playing slot machines and the costs of surveillance equipment and training. But sadly, the group missed a crucial plot point, namely keeping track of all three of the "red-heads" in charge of the evil-goings-on. Though they did great at cornering two of them, the third had their bag. Three died in the resulting gun and vehicle combat, two were sacrificed to an avatar of Azathoth.

Best image of the convention for me though, the wicked witch of the west getting ran over by a '78 Mustang, while a Prius drove head long into sub-machine gun fire.

Caught a cab with Caed and made it back to the room before 3am.
Posted by Tom K. at 1:48 PM

Yes, my softly worded attacks. The stuff of legend.