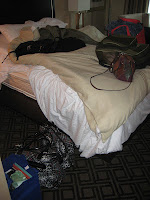 One of the nice things about the late night games, is that I when I woke up after a three or so hours of sleep I don't have to spend too much time moping around the hotel room or the hotel before I have to get going to the booth. And considering on Saturday morning I must've slept over four hours, I awesomely work up twenty minutes before the booth was supposed to open up. So I nothing to worry about rushing from the hotel to the convention hall. Peryton had a game that morning, so she didn't deign on waking up before noon.

Amazingly, I wasn't late. And Monk and K-Bell showed up to help out with the booth. Right at 9am as well. And I suddenly realized, I didn't have to work the booth. I was able to do that 'networking thing' that so many of the professional game designers talk about doing. So I had time in the morning to meet with VJ Waks and Kevin Herbst. There was some discussion of getting them to do scenarios for Elder Tunnels.  And then around 11am, Derrenn Canton was early for our lunch date, so we were able to wrap up early enough to catch the last half of Arsenal game on TV. And then at 2pm I was hanging with James Sutton, Sutter from here on, from FASA games. As mentioned earlier, Sutter is a big T&T fan so among other things we talked about doing something at BASHCon big for the game.

In the evening, I ran Spacers (TM) "53 Miles West of Venus," for three players. Batman and Ben from Carnage and a fellow named Mike.  It was a rough game. I blame the players but I suspect that I was too weary from the long week to deal with my own rules. Still we had some fun, and had a few brews. Ben is never without food and beverage as I have learned over the years.

Peryton had some drama with her 9pm. Which JerryTel and I know the real story behind, but I suppose we're sworn to secrecy.

"The Rat Pack versus Cthulhu V: The Sword of Samael" Proved I wasn't too tired to run a game. I was just mixing up what number the game was, I had it in my head that this was the seventh not the fifth game. Dan and Russ from most years were able to make it. I had a special way to work out which players got Rat-Pack characters and who would remain the "nameless." And, the Jerry Lewis character went to fellow who annoyed the most people during character development. Still it was a great game, probably the most even -paced large group I ever ran. I pretty much can only thank the return players as well as the new guys, they rocked and got into the yarn wonderfully.

Got back to the room just a little before 4am. The line at the noodle shop was very long and slow.
Posted by Tom K. at 11:22 PM