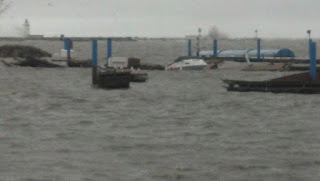 Getting off of work on Monday night, two days before we traveled to Vermont, with a lay-over in Syracuse, NY, was supposed to be a good thing. But when the winds knocked out our power at 9pm, yes sub-tropical cyclone Sandy hit Cleveland, and our waterfronts were washed over as well, that kind of killed that idea. The next day was spent first re-establishing contact with the outside world and avoiding the boredom that comes with a lack of electricity. Peryton made her way to work, and I climbed on top of our garage to remove tree branches from phone and cable lines.

Our little emergency radio, with its electric crank kept the radio and light present. We could even charge our cell phones, with enough elbow grease. And the little elf that wanted to be president, Dennis Kucinich, was proven right when the city of Cleveland-owned power company restored power to our little burg in less than 16 hours, while the more affluent customers of First Power were enjoying privatized triage and given five day waiting periods. Sadly, the winds had damaged our cable... sigh.

One interesting conversation of the Days Without Power was with my step-dad.
"You be careful driving." Don "Maybe just not go. "
"Oh the actual conditions on the ground are always not that bad." Tom "I was in the Red Cross."
"I am writing this down." Don
"Famous last words they may be, eh?" Tom
"I figure those will be drowning sounds." Don
"I'll call when we hit Syracuse." Tom

Peryton was called into work Tuesday, so we couldn't leave until after 2pm or so. I actually spent most of the AM going back to bed, after waking up with Pery who had to leave early. And something happened that doesn't happen too often. I imploded. While lying in bed, amorphous anxieties would creep up and I'd realize that I was awake, every 15 to 35 minutes. Was it the storm? Was it new pressures at the job? No. It was because I had promised to clean the cat boxes out before the old woman got home.

So around 2pm, we were headed out. While we got to enjoy rush hour traffic in Buffalo, I had our trip to Syracuse down to the minute, including the inclement weather which had ceased around the New York border. Missing the correct exit to the airport to pick up Monk, added some time to my figures, but we got there. And I had a rather sleepless night in our traditional Red Roof Inn.

To quote Tyler Dion from the following afternoon, "It was like the night before Christmas."
Posted by Tom K. at 12:07 AM