My CoC game "Bigger Than a Breadbox" was full. Derek, Zach, and Dan Mills of the Two Dans (Him and Dan Williams) showed up from last year. TomM, Rainbow Chick and Wotan (Scott's new nickname, hey I aim to please), and later TomM's son joined in. This is basically the continuation of what is becoming my "Castle of the Moth Cycle", which is in its 4th year. I suspect going to become my Lovecraft yarn that defines my style of CoC playing. Though I want it to go creepy, I can't get over street-level occult which just touches the supernatural. Well this year, I actually got to something Lovecraftian though Mills, the Antiquarian, reprising his role from last year took away my major plot twist. Still the players made the game for me.

Let me go into more depth on the players. Wotan took his rural county Sheriff role to heart, and even came up with a background story, that I loved listening to. Derek's reprise of his role as the cut-up FBI agent, and added depth to it as the guy who resigned to take the fall for the shortcomings of his and his partner's investigation last episode. TomM played his director who caught the brunt of Derek's animosity and had to deal the still-employed agent that was severely handicapped from last game, and the hot shot agent assigned to his unit to clean up the mess. Rainbow Chick jumped right into that over-qualified, highly ambitious FBI agent's shoes with relish. And the Antiquarian, adopted his role of a dead man walking around in a pizza delivery guy's shoes with solid resolve.

I don't want to give too much away, but for three years running the players have been able to foil the Mi-go from completing the rewriting of their version of The Unspeakable Cults. This year, they got pissed. The plot was supposed a little farther than it did, but I was having fun watching the players. So I have a good lead in, with Derek's, the Antiquarian, and Wotan's characters being pivotal to the next installment, "The Keys to Christmas Place."

Wandering Through the Midnight Corridors

As my game ran over, I was a little late for James Caprio's The Cube of Death, a geeky/nerdy game show with hit points. I was seated with the dorks. While the geeks and nerds rooted for their celebrities, us dorks shouted out wrong answers and got yelled at. I have no idea who I was sitting next to, but those two dudes were hilarious. I am good at being wrong, but I really had to step up my game in their proximity. 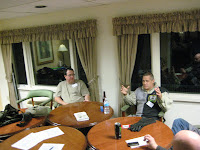 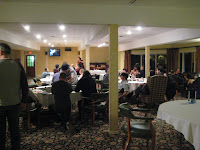 Checking out Club Andre, which was open already, all the kewl kids were there, but Peryton wasn't. I found her back in the room hamming up her stubbed toe for an Academy Award. After major surgery and four monologues, she muttered that she may come out and "be among" everyone. With that promise to think about leaving the room, I was out of there.

I spent a bit of time chatting it up with the Two Dans, and a woman named Margo who was wearing a Harry Potter scarf but rocking my world with Noir-style femme fatale snippy dialog and attitude. I almost didn't notice it when Peryton showed up. 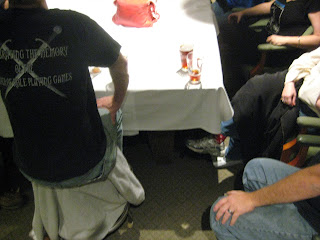 Andre's Billiard Room of Doom was hot. I mean the temperature was broken. But still, everyone was in there. That included Jeff Talanian of Astonishing Swordsmen & Sorcerers of Hyperborea fame. As well as Steven Dresser, Zach, Pretty Boy, Byron, Rainbow Chick and Wotan, and various others. Monk showed up after hanging with his bunch of friends. The party itself was its usual affair, just more like a Roman bathhouse with everybody dressed, which prompted me to propose a 3am toast on the porch, overlooking the now still, and black as ink Lake Morey.

There were actually around three toasts. We didn't think Andre, Scott (the guard Scott), and Ben were coming. They came out of the room after 15 minutes, so the rest of us pretended to have waited for them. I think I was getting poetic, but don't really remember-- let's put it like this, there was more beer and liquor than anybody could finish.

After the ceremonial excuse for a bit of fresh air, we made our way back to Andre's Den of Iniquity. One by one we started dropping off. A fellow by the name of Arun slipped in and refreshed the mix with conversations the Matrix and other movies. I think we, Monk, Peryton, Zach and I, made it back to the room, in a pack, sometime between 4 and 5.