It's Cthulhu. It's Not Cthulhu.


You've probably heard parts of today's blog before. But not because I am going senile... I think.

Last August during late night GenCon sessions, I had the misfortune to lose all my prepared material for them. As if as a metaphor coming to life, my very old, over 20 years-old, copy of the Call of Cthulhu rules book "ate" the material. Twice. Yes, two times. Really. The perfect binding has developed gaps where neatly arranged loose pages worked their way into the bulk and stayed connected. Those of you that have ever gamed with me, know that I was not going to go through the text and turn page by page looking for the work. I just figured the material fell out while I was hiking from the Dealer's Hall to the hotel conference room, so I improvised.

I had the players develop characters on a half sheet of paper, for four broad stats, or STATS as I like to type them, plus thought up a matrix to randomize their Sanity rating. I discussed with each of them what type of character that they wanted to play, and we mutually came up with three skills for them. I threw out three arbitrary percentages for the skills to be assigned by the player to those skills. I then gave them two minutes to write a list of important items that would be available to the character during the game. It worked well and the dice rolling resembled BRP.

These two incidents, out of the three late night games, I ran started a fire in the back of my brain. Now I already had a set of horror rules, Crawlspace. But these rules were basically written up to give actual form to an amorphous set of guidelines that Monk and myself were using for horror scenarios in our shared TAG d6 system. We hadn't done much with them because we haven't had anytime over the last few years to game together (a situation which we must amend).

At the same time, not literally, Andre Kruppa's and I have been corresponding, if FacetuBe comments count as such, about horror role-playing. Now, to me, the Kruppa is the master of horror role-playing. Besides his name invoking images of Dagon and a grouper in my fevered mind, which I mean as a compliment; he is a GMs' GM. He likes to turn his scenario sessions into little sit-down theaters through not going LARP with them-- knowing not to is a sign of refinement in my book for sure. He doesn't have a long background in theater, so I feel that I can provide some pointers here and there. But mostly I watching him "craft" master performances from the players in his parlor.

We share a common problem along with a common background as not typical CoC-dudes. We both love CoC, but don't want to craft all of our works around Lovecraft, its mythos, and its fans' canon. Doing generic horror for Chaosium is problematic, as the Cthulhu crowd likes a certain format and style of game session, which many of our separate works do not fit. Him and I have been discussing whether to craft our own individual horror systems or not.

These days, my horror TAG system is being made obsolete by JerryTel's Stay Alive. I shouldn't sell myself short, but I really want to give this little side project of his some room. He has some real practical solutions for grit and detail in a T&T-derived system, that I think are inspired.

I decided to rework my RPG settings this year, as you probably already know. A couple are very close to being ready for release. My TROTT system, Tom's Really Outstanding Table-Top game, Different dice, much more detail, but hopefully very efficient. But Crawlspace, MY horror system, poor hiding redheaded child that it is, just wasn't special enough to compete with other rule systems without a twist. I did mention that a fire had started burning in the back of my head though. Well, the cleared foliage had left some fertile soil for seeds.

Sometime in March or April, I did some impromptu Play-by-Posting with Tom Grimshaw over at the Peryton Publishing FacetuBe page. It was a fun day. I used a card-based randomization system that I developed to avoid numeric amounts. Using a playing cards and success being determined by closeness of the cards, it helps avoid cheating by the participants. And then later that night, I sat down to work on my horror scenario for this years Dark Gathering in Syracuse, NY. I looked at the computer screen for a second...

WALLAH! I took my old Crawlspace manuscript, and its mostly completed revision, and reworked it entirely. Applying the principles for my Play-by-Posting playing card conventions, and a joke used in the original writing and I had a very unique game. Catering to long-term players with a fresh, newer angle. Movie fans will get it and it will encourage theatricality in my own minimalistic GM way. And simple enough for rapid generation for late night crises. The cards themselves turn the play session into something resembling a parlor game, which is where I like horror role-playing to sit. A level of intimacy, always helpful with horror, with flexibility as to where and how it can be played out.

And then five days later, I completed my scenario for the Dark Gathering. I even felt confident enough to format my late night scenarios for this year's GenCon. Not confident enough to not put the word "Cthulhu" in the edition block, which is after all the official play-testing edition. Okay. Okay. A cheap  trick, but hey all is fair in table-top filling, at least for the first year. We'll see how the players feel about the scenarios as they step into my parlor. 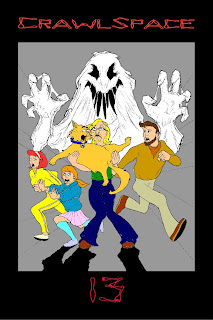