"In Russia Time is Travel and Distance Makes Rate"

Between 7:30 and 8:00, the Friday evening games took off, not on schedule by any means, but that is because it didn't matter. Gatherings, hoots, are like a retreat for conventioneers needing to relax from obsessive compulsion disorders. The Kruppa's "Mystery At Knobbe Hill," using his Lucid Dreams game engine, I believe, grabbed most of us. While Brandon and Don, Doc Time and Kalt from here on, pulled Ccrabb and me into "The Night Sculpture," for their Time Shredders RPG. At the same time Peryton was en route from Cleveland, and nice enough to call me at various points along the drive-- in case I got lucky with one of the housekeeping staff, I wanted plenty of warning after all.

I was really impressed with the Sculpture. It was a pretty horrific bang 'em up/shoot 'em up that us gamers love using an idiosyncratic but established time travel milieu, that I found seductive. I got to play a KGB agent from 1978 while everyone else played a veteran time traveler, so I had even more fun-- my fake Russian is awesome. And my agent already on the ragged edge of things, caught on quickly. The title to this section is a quote of which I am particularly proud of. Right around 9:30pm Peryton showed up, and watched the final quarter of the session.

You are going to hear more from me about this game. I intend on transferring about 90 pages of material to the Time Shredder system, after some of it goes to Qalidar first. I am thinking of a Time Travel hoot in 2014 in Rhode Island. Mind you, this will not replace the Dark Gathering. More on this other times.

Some time after midnight, Andre's game wrapped up. Everyone was quite impressed with his rules, I could tell by the beaming smiles. And the after-party ensued. Now in case you haven't heard, the Cleveland-New England connection is a bit famous, maybe even infamous, for our after-parties. And this one was no exception. The night's dancing horse was a "Levels: Love Them? Hate Them?" debate, performed with grand theatrics and high rhetoric. It's kind of a blur to me, but I do remember swearing that I could survive two heart attacks or something. Peryton was all smiles, and she was happy to be among our friends, which is what made me exceptionally happy. 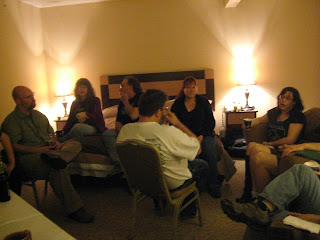 I think the night wrapped up around 4:30 for me. Not sure.

My photogeneity seems to have reached a startling new level of heinousness...

Planning to throw a party. Will be arranging it at one of event venues Chicago. Will invite all my dear friends. It’s been a long time haven’t attended a party with him. Want to get best arrangements’ done. Will check out internet for lovely ideas.