The Way Things Should Be: Dark Gathering '13

The Promise of a New Day With Headaches

Though I kept waking about every 40 minutes from about 7:15am on, my phone wasn't buzzing at me so I made myself keep napping until about 10:30am. I then I realized, I had no idea where my phone actually was. So after a shower and an aspirin, more for old age than a hangover, I was wandering around the hotel and knocking on doors like a meth addict looking for a lighter. Probably not as dramatic as that, because most of the time I spent having morning tea with Wotan and Rainbow in their room. The phone was in Doc Time and Kalts' room. I had left it on the gaming table to not miss phone calls from Peryton the night before.

Returning to our room at noon, I kicked the bed where Peryton still slumbered as best she could and mentioned that she was running at 1pm. I am going to diverge a little here. One of the topics of catching up between Hrothgar and myself on Thursday was a bit about the ins and outs of being a drunk. I pointed out that Peryton just wasn't drinking all that much anymore.
"I think she's hinting at something." I told David with a sad aspect.
"She's telling you to pick up the slack of course." He replied with a wink and chuckle.

Apparently, he was right. I was pretty bright and chipper and having a beer at noon, and the poor woman was acting like I had just boiled essential salts and reconstituted her ashes from the wreckage Hindenburg. While she did have a couple drinks the night before, I don't remember her being as warm and toasty as I have seen her before. So it is true, I guess. Boy, she'll be sooo happy to hear this.

Tony and Stephanie Sorrentino around 12:30 or so. Maybe they were there earlier, I didn't see them until around that time. Peryton's Robinhoo game, "Secrets of the Silver Grove" and the Kruppa's "The Jazz Man" Lucid Dreams scenario both were moved back to later starting times. Sheesh 1pm is too early for us Hooters these days, boy we know how to party.

I played in Peryton's Silver Grove and was happier than I have been in a while with her sessions. She was extremely nervous, but when things got going, it turned out to be a rollicking adventure for of weirdness and special effects (figurative ones) fun. No really. I cannot tell you how much fun I was having, and I was playing a character I didn't even like. I got to beat up Ken-doll stormtroppers and watch sun flare sentients shred their skins all while saving my beloved Aunt Betty from kidney robbers. Now it would've been better with my Pyramid-heads and Sewer-Monkeys thrown in, but hey nothing is ever perfect. Of course, my role-playing style was complimented by the practiced naturalism of Wotan and Petra, and the quizzical nature of Hrothgar. It was a nice coming together of an interesting setting, and four high caliber role-players, well three and a half since I was involved.

During the game, JerryTel was kind enough to text me commentary on the bayern Munchen versus Borussa Dortmund Champion's final. It was really kind of awesome. Monk jumped in asking for details on the get-together. I felt like Baron Munchhausen getting telegraphs from other far-off adventurers.

Dinner was at Tully's. I was not enjoying myself as much as I would've liked because of problems with the seating but the place's chicken made up for that. The Kruppa's group showed up after a while, but we couldn't really share a table, so we bid adieu until the after-party. 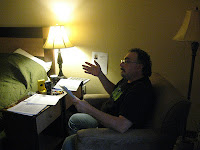 That evening I played in Wotan's "Lost on Echo Mountain- What Remains" for Call of Cthulhu. Now this man has been talking about crafting this scenario since I met him at Lake Morey last November. He always sounded to me a little insecure about GMing after so many years of not doing so. What I didn't know is that the man is a liar. Echo Mountain was an awesome game to play in. It was very much like when I was first exposed to CoC scenarios, in its detail and drama. And the plot flips, not twist or tilts. This was some pretty hardcore horror role-playing where Delta Green players would feel comfortable. I frankly liked everything about this yarn. The twist and the creatures involved, but mostly Scott's well handled action at the climax. We all died, but we never knew we were beat until we were beat. Very well handled "violence."

Andre's "Executive Meeting" Lucid Dream's session went fast, I hear, which for him means like five hours. Apparently Stephanie S. who I also hear is new to this adventure gaming thing, sat back, took notes, and then kicked ass. I have so little information on this game, or Tony and Stephanie S for that matter, I cannot say much. I did hear that rules worked "without a glitch" from someone in this game.

The after party ... well... it was "good." Actually it was great, we all pretty much had worked out our nervous energy the night before. Rainbow had provided us with a cheese and grapes platter, which was the best meal that I had had in a while. Total decadent indulgence there. Tony and Stephanie were there to say "hi" to a bit more. CCrabb, Hrothgar, and I started a game of musical chairs to start up conversations with everyone, but mostly to try and get the comfy chair. Everyone disappeared early, well 3:30, which gave me, the Kruppa, and Ccrabb a night cap together, which is always good for the soul.

At 4:45 I was back in my room, in its comfy chair, and had just finished reading Doc Time's Time Shredders. All was quite, even the wedding reception and the local kids partying away a Saturday night had died down. I was in a good place.
Posted by Tom K. at 1:09 PM