People have been asking me as to why I don't just do a Kickstarter or a "Pay What you Want" deal. Taking a break from the drudgery of making my writing coherent and slightly entertaining, I thought I'd talk about it here. Your'e welcome Bill, Tanja, and Ed. 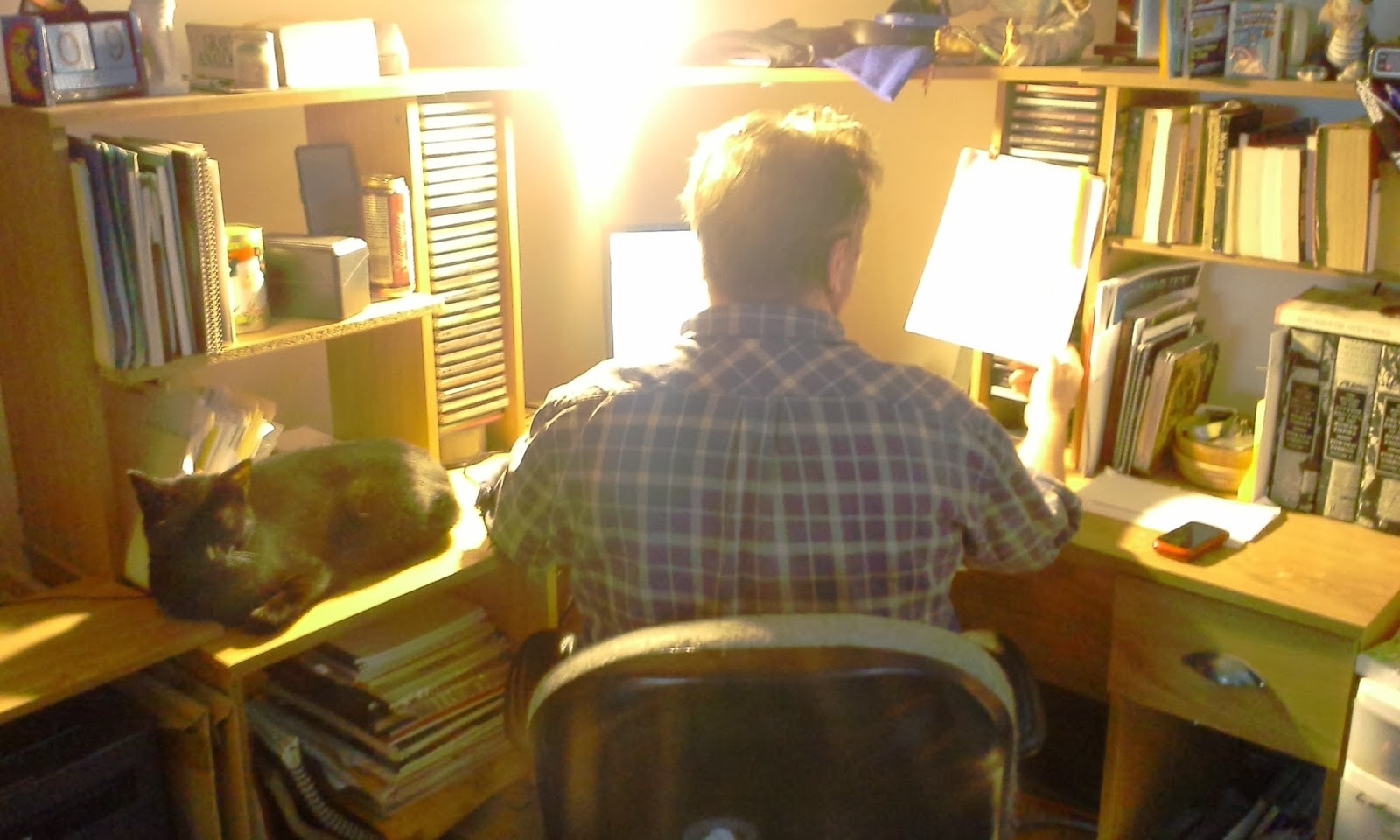 Kickstarter projects have become the TV commercials of my FacetuBe and G + accounts.  My friends, or in Google's case, various folks that are allowed to post on my monitor screen, know this or that guy or even a gal, that has this amazing idea for an RPG work that just needs a little help to get up and running. Over three years, after supporting about a dozen of these, two have come to fruition. The end products for all the hype, were kind of what would be expected without a lot of the hullabaloo around the item. Not bad, But definitely not nearly what I imagined. The price I paid was a couple times more than I would've if I'd just waited for the product, and the special perks (all the bumper stickers, autographed this or thats, and magnets I ever wanted)  are now available for a score of cents as well.

Beyond the euphoria and hype and past the the banal nature of the universe, the job of doing a successful Kickstarter seems to require at least 30-40 hours a week of diligent work, or a gang of twelve people that you can easily oversee. A lot of longtime businesses are getting great results from Kickstarter. This, last I read, was not in following the cited goal of the service, it is not supposed to be for them. For me it's a hobby, I do actually love working despite what my bosses might tell you, broken down into such a "professional" environment is just not for me. That and I want to avoid "miscommunications," as a Republican would put it, with the IRS. Frankly, the more I learn about this source of funding, the more I see see big business charging handfuls of pennies and nickles for what should be already free on this thing that we call the internet, while the hobbyists of the world assume the role of millionaire taxpayers.  It's like how cotton clothes are not made out of cotton candy.

The "Quick Start" is what I am calling the "Pay As You Will" options available at various PDF providers for RPG products. From what I understand about this option it's about promoting an item while possibly making some money for the "post-production" needs. In my mind, all I picture is a bunch of "free content" grubbers taking the author's ideas and re-publishing them later, maybe weeks, most often minutes, with maybe a word change here and there if they actually read in your native language fluently. That is with about a dozen broke RPGers bothering to start a bank account to give the writer a dollar towards the cause. Peryton tells me this is the way of the future. Okay, she didn't actually say that, but she does see merit in this sort of promotional activity. To me, it looks more like a way of getting in front of copyright pirates and would-be "frenemies" while still getting to deal with them. Once again the thought 'strangers only share credit when its a brand name that they are stealing from' jumps into my mind. Peryton's stuff sells better than mine, at least initially, so she may still be right.

I really hope I am wrong here. I hope Kickstarter is about artists with inspired visions making works worthy of investing in, not established businesses that had to downsize in the 90s. I would like to see one in ten down-loaders will give a quarter to the person that they are downloading months, if not years, worth of work from in the "Pay What You Want" format.

I hear that I suck. The one thing I don't suck at is getting it.

Now I am not ever going to say "never" to either method of money raising. I'll deal with Kickstarter when I can say "That's enough." I'll release a "Quick Start" promotion when it's "Pay At Least...(amount here)" not 'Pay What You Want."

Doing my own thing is helpful in many ways,especially when I am not playing at playing at being an independent start-up. I mean to be ridiculous here. I don't have to be a "start up." To quote Peryton, who was quoting LL Cool J (what an awesome name), "don't call it a comeback."  I have indeed been "doing this (continuously) for years" (already). Hopefully I don't have to be bashful anymore ladies. As for independent, I think besides being "gay for Ken St Andre" according to my wife, I hear I am just a wild dog. As for the "gay for Ken St Andre" charge, it's not true, but if it were, I'd be one hell of a better writer. In short I live kind of free of the heavy weight of others opinions of what I should do. I think that is called independent.

Your money has come to me by way of sales, hopefully because you like reading my stuff, not just my irresistible charm. I appreciate that money, it almost pays for the hobby. It isn't free, but it is a joy poducing it. And while I am always tinkering with what it is that I am working with, I hope you don't think I die after every release and need Gabriell's horn to be reawakened. A couple of omelets and some good coffee on alternating Sunday mornings remind me that life is worth living already every month.

Until somebody explains the worlds of difference to me, I think the way that I am struggling through is paying off.

"Peryton tells me this is the way of the future."

If you're going to make up straw man assertions to argue against in your blog, please attribute them to someone else. For instance, "Mr. Snuffaluffagus tells me this is the way of the future" would be fine. You could also use Jesus or Batman.

Well you didn't exactly say it's the way of the future, but I could type the text message. It's on my phone. So THERE....!