Well the film that every DC fan has been both waiting for and kind of dreading has come out. Luckily it wasn't that hard to both like it and think of defenses for the predictable onslaught of bad reviews as its predecessors (Batman Versus Superman, Man of Steel, and Suicide Squad) had. My celebratory mood moved from "At least they didn't step on their dicks this time" to "Well, that was a good superhero movie." 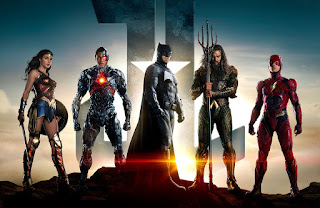 To be fair, Justice League has a lot of things not going for it even if you don't include the past movie efforts for the DC Franchise that wasn't done by Christopher Nolan. There's the whole Zach Snyder who hasn't read any comic books not written by Frank Miller, needing Joss Whedon to be forced into his crew to have a few one-liners and a smile here and there worked in. The whole Marvel franchise which can put out video games as movies as long as Spider-Man stays young and receive great reviews. Then there is the DC universe(s) which is needing to be crammed into one film. This last bit was what helped this flick out more so in my opinion than any of the action sequences and breezy character interactions, but more on that in a bit.

The characters worked for me. Batfleck, a beat-up 50 year-old man, moving from fighting master criminals to cosmic super-villains works-- I really do enjoy this rendition of Bruce Wayne. Wonder Woman fighting the forces of regression in her intro, might be staid, but it reinforced the icon. Newcomer to the JLA, in my 80s-form view, Cyborg was given a sense of uniqueness with his struggle with his machine part that I don't remember reading about in the pages of the Teen Titans the only place I ever familiarized myself with him. The Flash being a self aware, funny-ish 20-something, with a nod to his actor probably being related to one of the films producers, was not a bad touch. Aquaman, the Water-Dude, and Atlantis were the weakest parts, but Jason Mamoa got to take off his shirt a lot and his backstory gets some grit which makes up for too much LotR not-floating imagery. The villain Steppenwolf, Darkseid's uncle, was an obscure pick, but seeing his Asgardian-like butt get kicked by Superman was awesome. Really it spoke to my inner DC-Versus-Marvel self. Superman finally got be the stud muffin that needs his women to tell him when to put his pants on that every married man should be. And the supporting characters got some time and a little color as well, except for Joe Morton (Cyborg's dad) maybe. He could've used a bit more to do.

What especially worked for me is how the story-telling is showing the strengths and the weaknesses of our superheroes while defining the levels of power in the DC universe. Batman and an accomplished Amazon, can handle dozens of thugs but only handfuls of elite forces, like parademons. The Flash has to use his brains to not kill himself doing anything super. Aquaman is as strong as a tank, but Wonder Woman is Hercules. And Superman is a Kryptonian. Jack Kirby created the "wonder worlds" of New Genesis and Apokolips to delve into worlds with plenty of Super-Men already.

Complete with allusions to the (Old Gods) Olympians, Green Lanterns, and the aberrant aliens the Dominators, the antagonist is almost disappointing. Steppenwolf, for this uninspired, Thor-like cardboard cut-out, should have come riding in on a giant wolf, with a bunch of the Hunger Dogs riding in behind him, for accuracy. He should've only had parademons as scouts and special squads. The Deep Six, should've been ransacking Atlantis for the Mother Box kept there. The boss villain should've been sending reports back to Desaad and arrogantly dismissing more help. Unbeknownst to most viewers, Steppenwolf is a third-string New God from Apokolips. But the story wasn't about the villain, it was about the league of justice-minded heroes coming together to defeat him. Getting newer film viewers introduced to the mildest Jack Kirby's Fourth World while bringing back (um from the Dead, folks) Earth's greatest defender, Superman, epic enough.

The DC fan in me wants to call the flick a Godzilla, but the older movie critic in me will call it a King Kong. I am getting a bit tired of hearing the names Zach Snyder and Josh Whedon though. Can't they go write Danny Devito a Napoleon trilogy of films or something?