The Comic Book Movie of the Decade

In case you haven’t noticed over the past decades since 1997 when I first came on-line, I am a Batman fan. Any of the comic book scholars that I debate with nearly weekly, know that I believe that comic books are supposed to express something other than pornography and nihilism without being self-righteous and an organ of any would-be State Propaganda Department. Okay the pornography is Frank Miller and the Propaganda is everyone cowering to anyone not liking movies made for audiences not over 14 years old. I do not mind when the movie in front of me is not written by Proust. I also am not sitting around watching a movie because I need distraction between diaper-changes for my 32 y/o children. I also don’t mind when a movie wants me to like it. 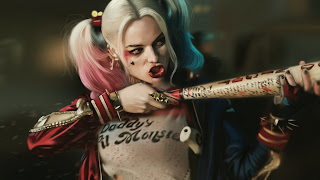 Okay, the movie Birds of Prey is not total Feminism 210. It’s more a comic book take on girl power set in GOTHAM CITY . It has no world-ending plot device and it is GANGSTA BATMAN. It’s also not afraid to get corny, because none of the Bat-Man franchise ever would go corn ever. Up front, this movie has a lot of pretension without the precociousness that we are used to after being lectured by Disney Corp. It staples down on the semi-successful scripting of the Suicide Squad and falls back the story. This is not a CGI and canned music puppet show of needing something to say. Everyone viewing this is just simply watching a movie, not an advocate towards the testament of a mythological cycle.

It comes down to wanting Iain Glen to play Batman for the next seven years. While ignoring how much the DC Universe series Titans sucks, it doesn’t always require the end of the world for someone to put on silly costumes. It does require some hard circumstances to need a silly costume and not just be absurd. So when the costumed heroes come out, it’s worth it.

The stages for the last part of movie combined the Tim Burton stages with the Chris Nolan feel for things This made the movie much better than the downward spiral of all the Avenger DC story rip-offs. It did not need to be written by 30 background-checked temp employees trying to equal Shakespeare or Marlon Brando. It need to be fun movie to watch without worrying about doomsday, it needed to be about people wearing costumes.
As to any criticism as to how “woke” the film is, remember seated friends that you’re watching a movie for 9-16 year old females.
Posted by Tom K. at 11:57 AM