Smoldering Parts, No BBQ pt. 2: The Hole Is Dug

Well actually before we headed out of town, the neighbor's Puerto Rican cooking got Peryton and I hungry for Colorado sauce. So we stopped off for some Mexican and a beer for me, because I had been a good boy and done some house cleaning while the woman was at the job. Then we got going.

The drive through east Ohio, Pennsylvania and New York to Syracuse, err the Syracuse area is very familiar. We amuse ourselves with waiting for the awesomely-named reference points. Vrooman Road exit, come on folks, "Vrooooom Man!" There is a humungous stone quarry just west of Buffalo where "a whole season of Doctor Who could be shot" according to Peryton. And my favorite town's name in all of NY "Gowanda," I get gushing about Pangaea, Edgar Rice Burroughs and Rachel Welch right about then, for no reason but that it sounds like Gondwanaland. Then there is my everlasting discussion as to who is a better songwriter Paul McCartney or John Lennon to finish the rest of the trip-- Pery just loves that one.

We got to the Maplewood Inn at 10:30pm or so, and CCrabb and the Kruppa were already there. We checked in, with some hiccups caused by an over-zealous desk clerk (isn't that always how it goes?), and walked over to Tuly's for a late dinner. Godsheads, seeing friends again after months, sometimes a year, is about the most wonderful thing about these hoots. We ended up back in the Kruppa's room, before the black plastic went over the windows and body parts were hung. We drank vodka from a skull to desecrate, err celebrate the lovely site we had chosen. And with that A Dark Gathering had begun. 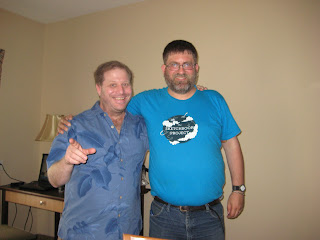 Friday morning was spent by me blithely driving all over the Syracuse metroplex and not finding a single grocery store after 30 minutes. CCrabb and Hrothgar were in the car enjoying the scenic route through slums, then the trendy district and then some suburb where they live off the shallow lake they build their houses next to and therefore don't need anything larger than a large convenience store/ gas station. With that we gave up, and headed back for the yarn that would get things started, Hrothgar's spooky T&T tale entitled "Compound Interest." The man crafted a wonderful game as well as great mystery off the top of his head and a couple words from the audience just to show me up. By the end of it, Dr. Watt and followed by Dr. Nik made their presences known to us. And once people got their breaths, we collected Jimmy for dinner.  There Nissi and Toe Head appeared after a hard day of rolling bums at the bus station, and ready for some gaming. Finally the Kruppa arrived before Jimmy or I could order a $33 steak and bill it to his room.
Posted by Tom K. at 4:02 PM