Smoldering Parts, No BBQ pt. 4: Okay, There Was BBQ

Sunday morning, I got to torture Dr. Nik by insisting that we "walk and talk" over to the gas station, I was out of beer, while he was suffering from blisters on his feet. Okay I didn't know he had the blisters, and the guy is too tough to admit it when he is suffering. Still had I known, what a feat that would've been.

I ran my game "Fever Dream" that afternoon. And what I thought would be a clever twist, turned out to be a typical run-of-the-mill CoC adventure. You see, after doing years of very pre-scripted story lines with developed character roles for the PCs; I keep thinking puling a bait and switch will show me as a brilliant GM. I forget that, only five people in the world have played enough in my games to get it. So my "take them unawares" approached impressed no one except me. Where I had three stratagems to get the players whether they tried to stay and fight, run away or something in-between; the players themselves just perceived that this was a "No one gets out alive" scenario. While they were wondering what exactly it was their overly detailed characters were doing there, I should add. Same thing happened back with "In the Midnight Hour" at GenCon in 2010.


Sometimes it's just me and Trigger.

An impromptu dinner at Tuly's with a rather unexpected crowded table, including someone who refused to come earlier (Dr Watt!), was quite fun. Jimmy and I got to show the two sides of Catholic culture for anyone not living in the middle ages. And Hrothgar caught the tab! 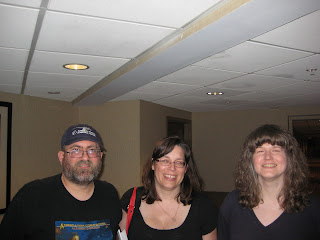 While others slipped into Dr Nik's impromptu game downstairs, all the Trollhallan fellows and dames in attendance (myself, Peryton, Hrothgar and CCrabb) tried out Dark Harvest with his story "Styrgoi." I was too tired to be the tactician of yet another player group of "girls," which I forcefully, and without asking, assumed in Dr Nik's "Abyss" and do so often in other games, so I just played a pompous ass of an Austrian aristocrat from 1880, though it was 1910. Chrissi and Robin did fine doing all the real work while I chased, err had others chase skulls-head moths. I did provide an awesome soundtrack as well. 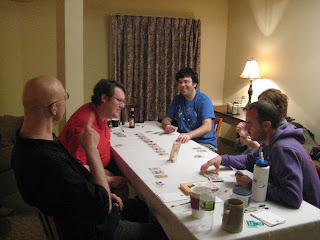 Now this after party was legendary. Even Peryton and Hrothgar showed up for the final night of festivities at the Kruppa's emporium of decadence and delight. Well enough, when we walked in there were heads being chopped off, always a decent start to an ending. Liquor was getting in short supply by 3am, so I mugged Jimmy and left Andre one last swallow of cognac, while Hrothgar, CCrabb and myself forced the Kruppa into a bout of singing classic rock songs and "What Do You Do With a Drunken Sailor."

I stumbled into the room at 5:05am, and Peryton, beating me to the punch, applauded me for my rendition of "Drunken Sailor."
Posted by Tom K. at 6:31 PM

You make a magnificent pompous ass.