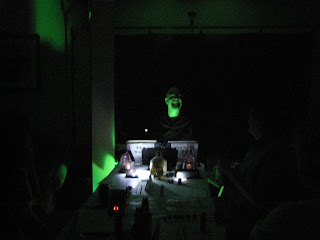 I have to admit, I was worried as to how the latest hoot was going to work out.

Back in November Andre Kruppa, GM extraordinaire, who shall be referred as the The Kruppa from here on, mentioned to me "I'd like to do one of your 'hoot' things." Now this was said with his New Englander-Maine accent which sounded more like "Ahw'd lyk to do uhn ov yer HEHUWT tings," that accent just brings so much joy and mirth-filled thinking into my life. We had been drinking; but the following morning we were still speaking of it. On the way home from Carnage, while dropping off Monk and K-Bell at the Syracuse New York, I saw the Maplewood Inn, and did some digging around there. So about a week later, we formed the CthulHoot FacetuBe group to get things rolling, no one liked my "KruppaHoot" suggestion. By "we" I mean the Kruppa, Peryton, CCrabb and myself.

Now PeryPubbers know from doing these things for about half a decade, never to expect too much. You pick an off weekend, some place in-between you and the friends expected to arrive and then wait for the four to eight people to show up out of the twelve to 900 that were in invited. Now CCrabb and the Kruppa are convention organizers, which speak a similar language but still a different language than Hooter. And when you give CCrabb details to mull over, she loves to roll up her sleeves and get down to the job of worrying about them.

There were some daunting details to definitely be looking at. This hoot was going to take place some six to ten hours away for just the organizers. Who did we know were those close enough or committed to Off-the-Wall goofiness enough to show up? What weekend would be best? Could we get room discounts and with what sort of contract obligations?  What should we call it?  The concerns were addressed and coping strategies developed, through no small part of CCrabb's work. Again no one liked my suggestion of "The KruppaHoot." Suddenly,  "bam!," invites for "A Dark Gathering" event, scheduled over this last Memorial Day weekend, were sent out.

Over the rest of the next three months, squalls of dismay would continue to arise. The fulfillment of a certain number of room reservations, required to get our room discounts. A lack of response by many who would be closer than others, requiring more painstakingly discussed invitations. And a definite lack of energy because of post-convention fatigue from other more formal events throughout that time causing forlorn statements at the Cthulhoot page began to worry me about anybody else wanting to come. Though I knew CCrabb would be there, the rooms were in her name, so I knew there would be four of us, the Kruppa nor the PeryPub household would ever leave The Editor, OUR editor, stranded-- and in Hoot history, that could still be a successful get-together. The at the Gathering page people started... well, gathering. Namely Tyler (Dr Watt) and Dr Nik of Carnage fame were the first. Elder Tunnels contributor and Trollhalla fellow David Crowell, Hrothgar, decided to show up. And then Nyssa Schmidt, Nissi, and Ray Hickey, Toe Head, confirmed as well. Somewhere in there Dan William (Jimmy from now on) signed on as well, I dunno when, I wasn't paying attention.

My count was that eight people were coming while CCrabb knew that 10 of us had confirmed, which works fine in my mind. That's a lot of Hooters in one area that none of them is from. Still CCrabb had to have something to worry about, so she decided that the Kruppa's scheduled games would conflict grievously with my single slotted game. Godshead bless the woman, I love her, but homicidal thoughts came to my mind. Someone in the PeryPub household finally got exasperated about even going, though she won't admit it, her nickname rhymes with "peryton." Truth be told, I knew she was exaggerating.

Still on that note, we got into the car on Thursday evening and headed to Syracuse, NY. Liverpool actually, but who's reading a map right now?

Hee! In which Tom is introduced to the aggravation of working with a detail-minded event manager ; ) (And yeah, I shouldn't have asked about the possibility of moving slots; I *know* better than that!)

I really like the way you write the post and help us with the information. Thank you for sharing this post. Please read my blogs too.
tikitunes review
thephostick review
peeps review
creaclip review
copper protector review

Really very happy to say, your post is very interesting to read. I never stop myself to say something about it. You’re doing a great job. Keep it up.

flipforkis a great utensil to be used in your kitchen.

Thanks for sharing this informative blog with us. Find out the best Industrial Flooring Contractors in UAE on Etisalat yellowpages.

Thanks for sharing this informative blog with us. Find out the best Portable Toilets in UAE on Etisalat yellowpages.

Thanks for the information please keep it up
backXpack Review