The older I get, the less satisfied I become with things. On my 35th birthday, I went to watch Waiting for Godot in Cleveland and could only notice that it was performed by actors with a solid background in clown performance. My 40th birthday was spent in Dayton, Ohio trying to keep a bunch of 40-somethings motivated to stay up past 10pm. I learned that in Ireland, according to fans of its music every day is either a wedding or a funeral. I learned this decade the parts that I don't like about the Lord of Rings movies are those that are actually in the book.

It was with some relief when Peryton discovered the Carnage Convention back in 2009. I found a not-too-small convention, where one does get to know people, find great parties, and some of the best tabletop role-players ever. We're talking GenCon caliber gamerdom but with a bar in the middle of the place, and room party crawl measured in yards not light-years. All in a place where I could convince honeymooners to come. Right at the Vermont and New Hampshire border no less, for the walk-about exploring drunk like me.

It's sort of on that note, that Sunday morning came about. Everyone packing was being done quickly and without problem. I didn't even have to play the "Where did I leave the camera?" game, that I so love to. So Monk, Zach, and I headed out to lounge area to enjoy the morning view of the lake, still cloud-covered, mind you, leaving Pery to do her last minute hems and haws in peace. Finally ran into Dr. Nik, who was only a blur most of the weekend so far. Rainbow Chick and Wotan showed up as well. Wotan showed his own poetic side when relating to Nik his thoughts of the weekend. It was a rather nice spiel. I was jealous.

Peryton came limping from the car a little after noon, so there wasn't much else to do except say goodbye to everyone and get going. And leave Lake Morey. Margo, was hanging with Dr. Watt and the Two Dans again, and she was acting pretty despondent at my only casual wave. Peryton swooped my coffee cup, which I was trying to lose just I often do my camera, into my hand, so I cut the flirting short, to say, "We'll always have Paris."

And with that, the last plane leaving Lake Morey jockeyed down the runway. Carnage Noir was fini. Like any good noir flik, I just can't wait for the next one. 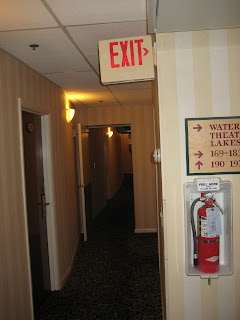 Oh did I mention that Steven Dresser won the Barroom Brawl for like the 100th year in a row?

You always make me so depressed when I read about how much fun you all had! Hopefully next year....