A friend of mine described my time at GenCon as "... holed up running games all weekend."

As you might have read elsewhere, Pery and I weren't doing the exhibitor's booth this year, instead focusing the PeryPubbers on running events. While I didn't run the most events that I ever have at GENCON, I did nine events. It was some work, but it didn't cut anything out of the great experiences that the convention is for me.

The road to GenCon
The passive-aggressive stance of the LLC members towards the anti-homosexual legislation in Indiana annoyed me. Really why did they say anything if they were not going to be going anywhere for five years, if then? Oh yeah, to stir up media mentions of GENCON. I didn't want to go, but Peryton reminded me that we had already paid for our room with JerryTel by then. Having six new scenarios about 3/4s finished at the time of the announcement didn't hurt either.

Over the spring, many of the new GM PeryPubbers and we met up for hoots to basically playtest ourselves. GENCON is just too much of an occasion to walk into without getting some practice in before hand. In June, I actually played the Arkham Horror for the first time in like 20 years to make sure that Caed was familiar with the board, its pieces, and game mechanics.

Still about four days out from the trip, I decided to play CIVIII instead of doing pre-generated Characters for the games. Other, real life things, had my dork factor at a particular low ebb.

I was mopping the floors when the house-sitter showed up Wednesday AM. Peryton decided that her mix of 80s Moody Blues would be the best road trip music ever on the way down. Frankly, I was wondering if I was going to have any fun at all this event.

Old Home Eve, our Wednesday night party was a success though. Beckett, Cram, Jedi and Jessi, Caed, Kal, Batman, JerryTel and the Boy, Sligo, LinZ and Joe, Darrenn E. Canton, a couple dudes by the names of Chuck (I have the business card) and "D," then finally WEB showed up-- If I missed anybody, please let me know. Though Bill, WEB, lectured me on the expensive drinks, at the Park Plaza lounge, I loved the place. I'd talk Beckett and Cram into "second location"ing it to stalk WEB down at his fourth or fifth location. Still finally saw the hotel room that I would be living in for the next five days around 1:15 am. I wasn't staggering too much.

Happiness, at last
The J.W. Marriott is not only very far away from most of GenCon, it is actually a very, very big complex in and of itself. It was far from the hivemind of the majority of gamer dorks (BOARDGAMES), and it is here where the indy role-player ghetto was. The farthest room at the 400 meter long north hallway was where the PeryPubber clique dominated things (the exotic location Room 209). But the room had four tables, and most of the other GMs in there were truly independent gamers. The Pubbers took up three out of the four tables for a couple of time slots, quite a proud moment for me.

After the first fifteen minutes of running the first game, "Big Foot Hunting" for JerryTel's Stay Alive, I was in my element. Now the great group with me didn't hurt. But even by the last game on Sunday, "The Easter Bunny, the Holy Day Horror" for my on Crawlspace, I was really enjoying myself.  Even the extremely large groups players for my midnight games and the lack of air conditioning after 11pm, couldn't ruin any session. By the way, thanks to a player complaint, thank you Matt and Leslie, a manager has promised me, or other folks, fans for next year-- it was verified at 91 F degrees in the corner I did my last night game in at 2:13am.

The convention around me

Wednesday afternoon, I noticed GenCon has finally put up large maps of its Exhibitors Hall outside the exit. Since I wasn't running a booth, I only walked into it twice. Once on Friday AM-ish, to see how big the crowds looked (a very good time to do so BTW, without the clusters, clumps, and clueless of Saturday) on the way to a game. Sunday afternoon, I found where I wanted to go on one of those maps, Palladium Publishing, walked in the closest entrance, got there, bought my stuff, and left. The clusters, clumps, and clueless were just rocking out still. Sorry to a couple folk about that.

I noticed a lot more prettier younger folks running around this year, more so than other years. I actually watched a "Hard Gay" cosplayer techno-dance down a hallway with a boom box on his shoulder. I wanted to see if he had any disco on the CD then he'd learn how to really dance, but I had a game to get to. Turn it up to 11, I say. To be clear, the man's music wasn't loud at all.

Speaking of loud though, one of my midnight games was almost crashed by a group of idiots basically looking for a room to squat in for a party for kids too cheap or too broke to have their own party spot. The group I was running didn't mind the silliness, nor the squatting, but they started coming over and interrupting us with drunk cleverness. This ticked off a couple players, and I was jealous, so I chased them out of the room. One got officious with me asking "What is your event number?" I threw a program at him and told him to look up the RPGs running after 11pm that night and then narrow it down. For another hour, he and his friends would hide around the corner in the hallway, sneak up to peek into the room, and take pictures of me. They got sleepy and went to their nap-nooks within 40 minutes.
I bring up this tale, not to bitch about the partying, amateurs, but a detail about GENCON operations. While I am checked throughout the day by volunteers, in the middle of my events, to make sure that everyone has their badges and that they have given me tickets; those same volunteers were gone by about 8:30pm every night from the desk they were working at. This sort of 9-5 attitude makes strict policies about what table GMs can and cannot do somewhat hypocritical. Either be in control or get off my back when you're not tired dudes. 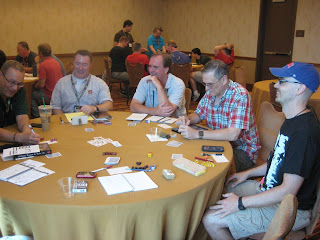 After my afternoon T&T game, "Yetis, Yet Again," I grabbed David from Toronto for a get together. I actually had enough time to meet and have dinner with Brad McDermitt at High Velocity, the sports bar at the JW Marriot. That establishment has some awesome house-made corned beef for reubens. LinZ and Joe found Batman and me hanging out at Loughmiller's Pub about 90 minutes later. It was Saturday and I was on the downhill part of my scenario running. I had a break between 5-11pm that evening. Heck, I was even able to spend an hour or two with my beloved Peryton and the Boy. JerryTel was running the auction this year, so he was actually busier than I was for our comparative vacations.

It wasn't until Sunday, that JerryTel, Batman, Cramm, Peryton, the Boy and I could spend some real time together. Nicely the Bourbon Street Cafe had room for three of us. Sadly the Sci-Fi channel had only sucky movies on for the rest of the night. I think there is a show called American Ninja and Pirates or something these days. If there isn't, there should be.
Posted by Tom K. at 10:37 PM