Pasty, Fat Fuck that I am

Yesterday I head that if I "Want to improve (my) game mastering? Get up off the chair." This struck a cord with me. I was reminded of days when I was spry and had so much energy that I couldn't sit down while running a game. I felt young again. But I also know now that while I was a good GM back then, but as I am not good as I am now. Game-mastering that has the GM feel good and connected with even complete strangers is not a mysterious ritual . Further more, game-mastering should not be about the only time a person bothers to exercise.

Quick disclaimer: Werdna (Scott Malthouse) is a person that is comparatively younger than me. He is also one of deeper, better thought table-top gamers that I will ever meet. His articles provide me with perspectives that I would never think of on my own. The debate going on here is a discussion among colleagues not an derisive argument between unfeeling agents of imaginary factions inside of some great schism in a hobby meant to be for fun that often isn't. Also, there is a good chance that any participants in this discussion will not come to a conclusive uniform outcome as to how things should be. 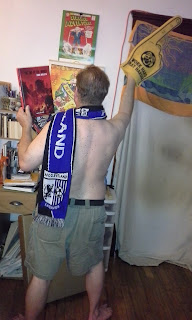 Let it be said, that as a GM I got rid of GM-screens in 1991. I would put scraps of paper in front of me, and when someone needed to see if I was making things up, I'd pull out a manila folder with the written-out scenario in it from my very book-bag. In these days (20o4-present) of electronic readers, video players, and complete stereo systems in single large-pocket sizes, this habit of mine has only gotten worse. Lordsheads, that book-bag is sooooo damn heavy. Apparently, I am a radical.

While the mixture of bad decision-making in dietary matters and ever-growing food industry in modern non-manufacture-driven economy, have helped me put on pounds since I was 14, my tabletop gaming passion has never required me to carry around a lot of stuff. Though the providers of current "adventure gaming" would have you think otherwise, "gaming" does not need to be burdensome nor preformed by sedentary people. If indeed folks seem to think that showing up to a "role-playing" game requires fifty pounds of equipment and being out of shape signifies a person's inner deepness, they are welcome, but it really should not dictate the reality of the hobby.

At the same time, we should not be so concerned about looks, and our personal smell (GAYMERS), that we cannot share those sparks of intelligence that show how imaginative we are. Cosplay might be paid for by the electronic gaming industry, but those game designers do not have as much fun as we have for 1/15th the money that they spend. Table-toppers get the lookers for virtually free because of our fantastic thoughts.

A little about GMing a RPG session.

Table-top should resist the urge to be a performance artist. Indeed, a good GM is of course one, but folks should not see it "for free." If you get this, sit down already. I mean it. Folks at the table aren't here to see your passion. More than likely they're here to see how a game should work or at least want to sample the game mechanics. Your passion helps, don't get me wrong, but folks want to see an activity formed by a prcess developed by you. They will apply to possible situations well away from the table that you are sharing with them much later.

Actually your passion about any game system that you are working is not indicated by whatever position you happen to be in while being observed by others. The desire comes through in the knowledge of the game system. The drive to be entertaining comes from the technique of presenting players with the options that they have. Most often, what is indicated by your standing or sitting is how much control that you as GM want to have.

You, yourself, get a whole lot out of this interaction. Besides being clever, you get to organize things. You get to shift from being omnipotent as the GM, to slovenly ignorant as a dim-witted NPC. Best yet, you make the patterns as you roll dice. Hopefully you don't fudge roles too often, sometimes you need to, most time you don't. Using the success or fail of dice/card/whatever determination provides the GM with as much entertainment as the scenario set out in front the players. Your own heart beats faster, you are quicker than usual mentally, _and_ the opposite (as well as the same sex) thinks you are sexy.

Now about standing up and sitting down.

Okay, hopefully you walk, or wheelchair around in fresh air, enough to get some a sense of well-being to not be expecting too much from the players sitting in front of you. It is now that you should know, that everything is up to you. Good or bad, it's your fault. There isn't a set of rules written that is going to preserve you from any criticism from the folks that have come to the table between you and them. Here is playing field. He is where you prove yourself.

Sitting while having players define their Characters, tells people that they are in charge of their characters. You are, hopefully, actually distracted with important details of the upcoming scenario. Familiar players should act as coaches to new players with designing their PCs.  Try to listen to the conversations going on, this helps you get notes on how to make the upcoming adventure great in everyone's eyes.

What your posture during the start of any narrative can be anything. That position is actually going to define the rest of the session. This subject will be covered in later blog posts, or not.

Stand-up when you're not in charge. You are now, in fact, floating, above each and every individual Character. You're looking at the PCs. They are in charge, you're just showing how special that they are. Take notes if you're any sort of author. These moments ae gold and should be cherished.

Especially in argumentative situations, you sit down when you need to tell everyone that you are really in control. This bit might be counter intuitive, but it shows that you are a being of finite energy and patience. You can even pull out a reference material at this time. Feel free to stand back up again as you read where your GM decision is legitimized by the rule-set. If it isn't, you made a mistake, but guess what, you're the GM, do not admit to being wrong about the rules. Anybody pressing it is being an ass, let him play himself out. He, or she, just looks confused in the end.